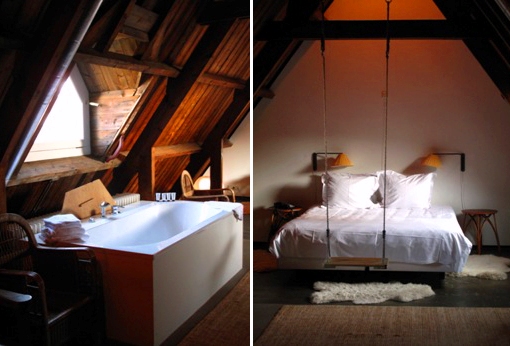 when i visited woonbeurs in amsterdam a couple of weeks ago, i was delighted to be put up in one of the most interesting and conceptual hotels i have ever stayed in!

the lloyd hotel is situated on the waterfront in the heart of amsterdam’s eastern docklands area, oosterlijk havengebied, and over 50 dutch designers including  marcel wanders, atelier van lieshout, chriistoph seyferth and ineke hans, have contributed to the interior. all 117 rooms differ in size, style, and perhaps most significantly, star rating, creating a hotel that is easily accessible for everyone. 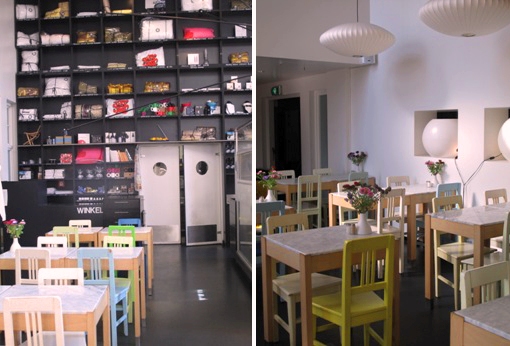 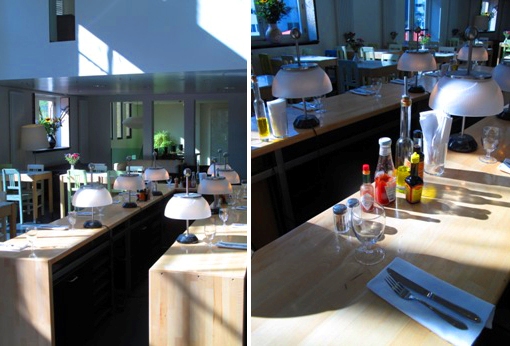 the hotel offers five categories of rooms organised according to size, with 1 star rooms having shared bathrooms and restored original features, while 2 and 3 star rooms offer an element of surprise through magnificent views and incredible fold-away bathrooms that maximise on space.

the 4 star rooms boast exceptional interior design and plenty of natural light, while the 5 stars rooms are simply stunning, including one with a four-metre-wide bed (which sleeps 8!) and another in the eaves of the building with a swing suspended from the rafters.

i was lucky enough to be given a guided tour of the hotel, and the eclectic mix of functional modern design offset by the loving restored beauty of the original building really blew me away! it was fantatsic to see that the hotel’s directors, suzanne oxenaar and otto nan, have really celebrated the building’s eclectic part-art deco part-amsterdam school style and embraced its tempestuous history with gusto. 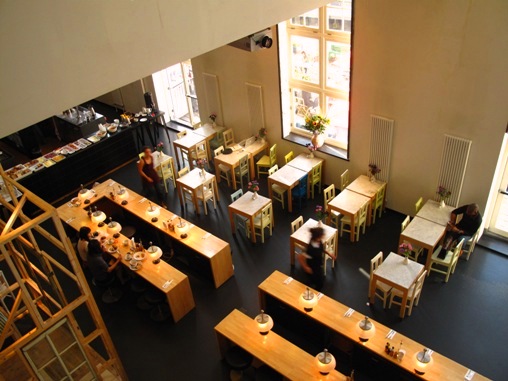 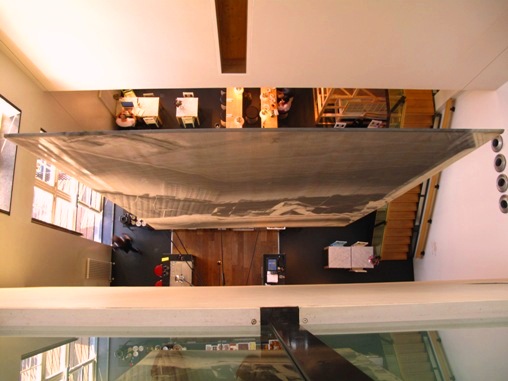 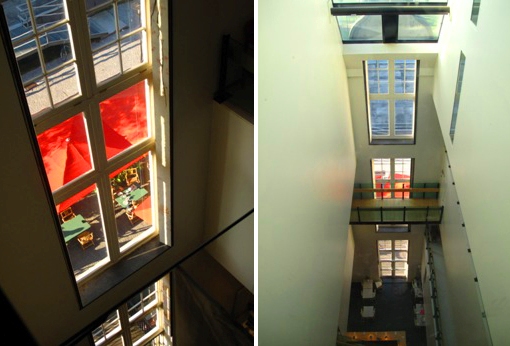 as wonderful as the private sleeping quarters are, it is in the centre of the building where the modern design element really comes into it’s own. the sheer volume of space in the central section of the hotel has been created by removing huge slices of the interior and allowing daylight to stream through the skylights six floors up, an effect which has been described as “a kind of architectural exorcism, a bold attempt to liberate the building from its oppressive past.”

and the hotel does indeed have a dark side; built in the early 1920s, the old lloyd building has served as a migrants’ boarding house, a detention centre, a young offenders’ prison and later, as an artists’ studios. in its dark, monolithic dimensions and long straight corridors it is easy to conjure a history rich in terror and despair; indeed, walking to my room late at night past a long row of creepily positioned nursery cots, i was eerily transported into the hotel corridors of “the shining”, thankfully minus the elevator of blood! 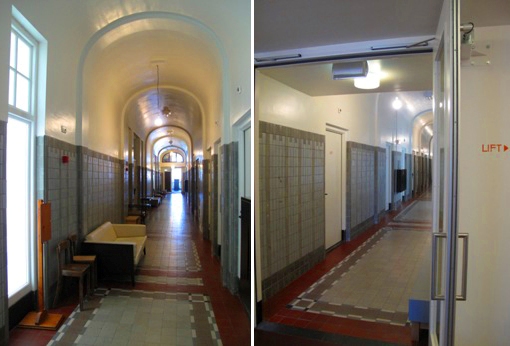 inside my room though it was anything but spooky, with a stunning curvaceous wall separating the bathroom from  the sleeping area, and large shuttered windows which offered a breathtaking view across the waterfront, complete with beautiful sunrise the following morning (although i’m not sure the hotel can lay claim to that!). 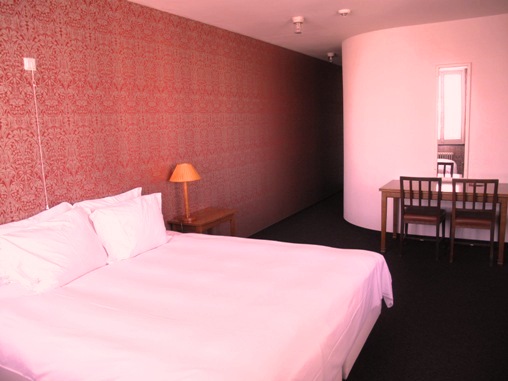 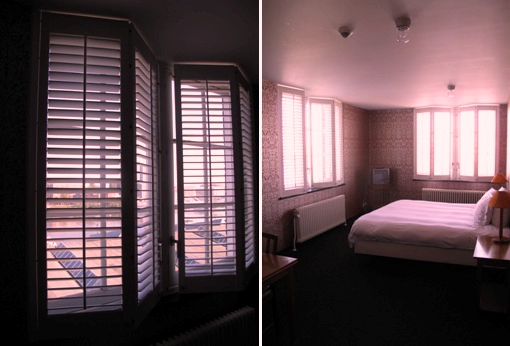 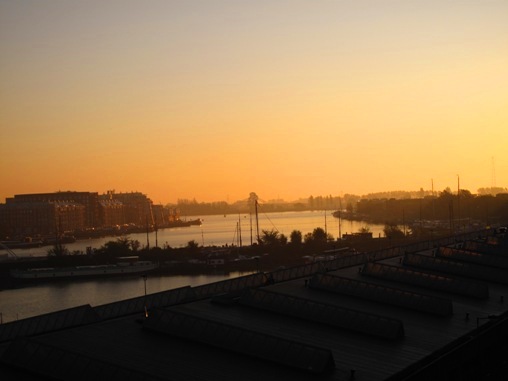 with thanks to the netherlands board of tourism & conventions and the lloyd hotel for the accommodation and wonderful hospitality. 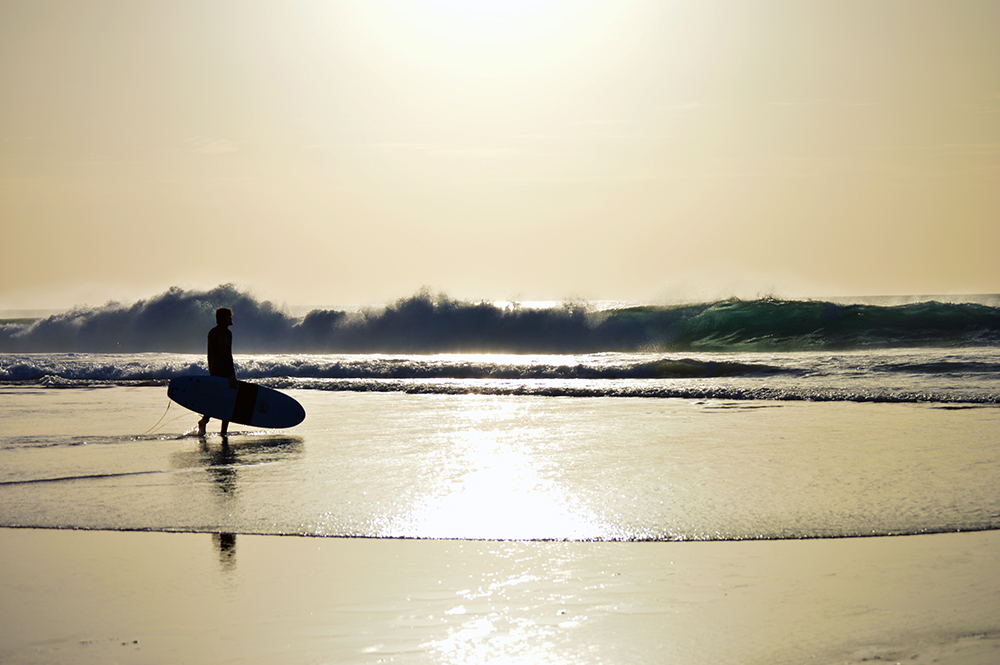