in pursuit of relaxation

while in morocco last week, i stayed in three very different, but equally luxurious hotels – well, the tour was called ‘morocco in style’ after all!

our first home-from-home in morocco was the mazagan beach resort, located on a remote section of the moroccan coastline south-west of casablanca, close to the fortified city of el jadida (named mazagan by its 16th-century portuguese rulers). 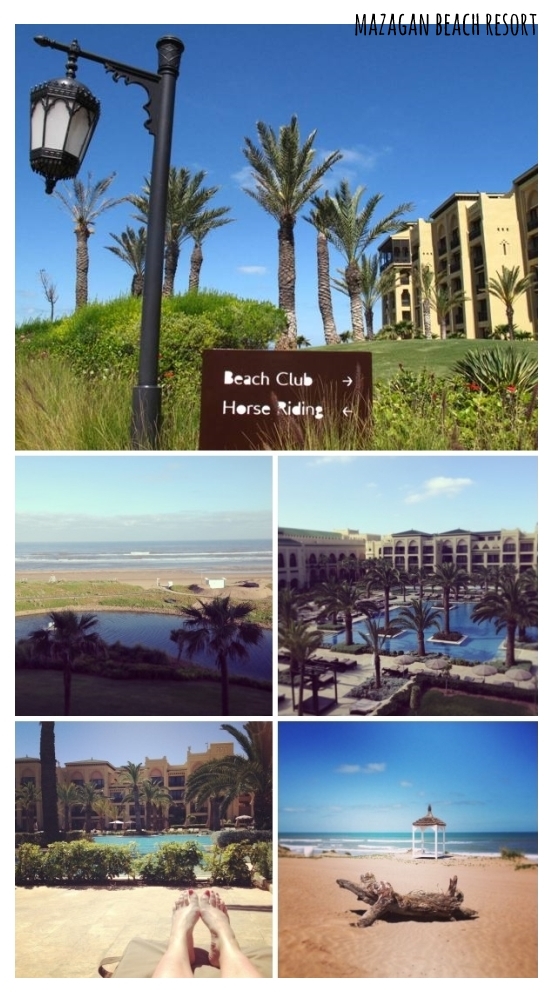 the hotel’s grand riad is simply ginormous, with 468 arab-moorish style rooms and 17 suites all offering views of either the central pool area or panoramas of the atlantic ocean; happily i had the latter. trust me, having seen neither sun nor ocean in over 6 months, drawing back the curtains in the morning to reveal the stunning vista (complete with horses galloping across the sands) was a sight to behold!

the name of the game at mazagan is relaxation, and this certainly is the place to do it; lazing by the giant pool (i dipped a toe in but it was freezing!) or wandering along the (slightly windswept) beach are very tempting, but the pièce de résistance is the spa. with stunning views out across the atlantic the mazagan spa offers an intimate sanctuary in which to revitalise and refresh, with traditional moroccan body and facial treatments designed to leave you rejuvenated, relaxed and restored. there is a 100 m² authentic hammam with marble and mosaic décor, featuring a cool room and two internal steam rooms, 19 treatment rooms and a beauty salon offering manicures, pedicures and hairdressing. oh, and there’s also a state-of-the-art fitness centre but seriously, who would contemplate running on a treadmill when the option to run barefoot across a magnificent 7km beach is on offer?

i indulged in a full body “de-stresser” massage with orange blossom oils to release all my tension and soothe my tired muscles (london life already feeling a million miles away), which left me feeling so serene and blissed-out that i could barely move to clamour onto the coach to depart for our next hotel. 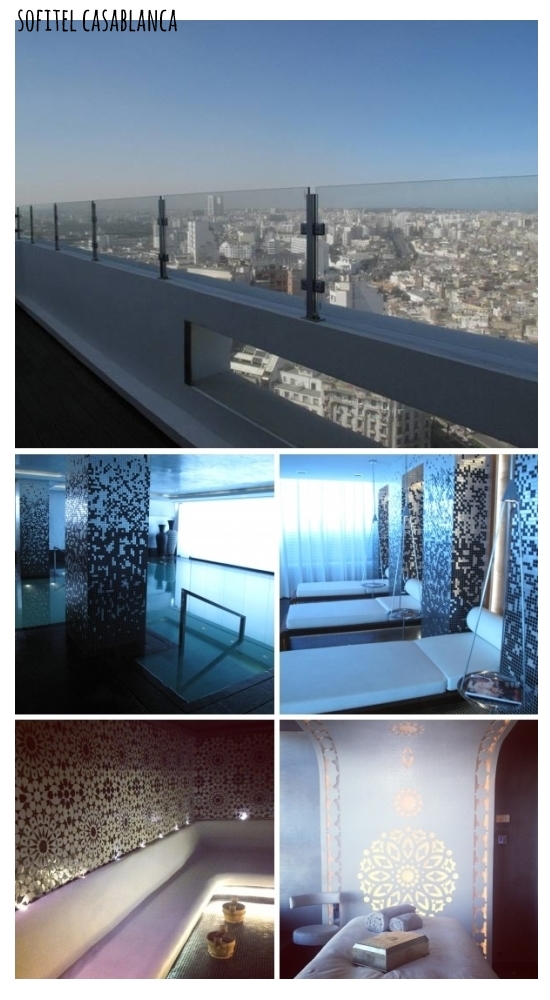 we arrived in casablanca at the height of rush-hour, greeted by the blare of car horns and screech of wheels edging slowly forward and breaking sharply to avoid pedestrians darting between the rows of traffic. but as soon as we pulled up at the grand and shimmering entrance to our hotel, the cacophony of chaos outside simply disappeared.

designed by marc hertrich and nicolas adnet, sofitel casablanca tour blanche is a soaring, graceful tower, described as “an aerial modern sculpture against morocco’s white city and vivid blue sky.” inside, the moroccan spirit is blended with stark contemporary detail, from the gleaming black tiles and luxurious rain showers in the bathrooms of the 141 rooms, to the sophisticated monochrome geometric zellige designs decorating the so spa; 2 floors dedicated entirely to relaxation and wellbeing. the pool area is an oasis of peace and tranquility, lit with a soft blue hue that instantly calms, while the traditional hammam is equally relaxing and restorative; moving you through multiple rooms filled with varying degrees of steam, before being cleansed thoroughly from head-to-toe with mineral-rich rhassoul lava clay from the moroccan mountains.

my highlight though? the terrace of the imperial suite at the top of the tower with it’s stunning panoramic views across the city, taking in the awe-inspiring 60 story minaret of the grande mosquée hassan II, and the urban sprawl of brilliant white buildings extending inland from the port. simply breathtaking. 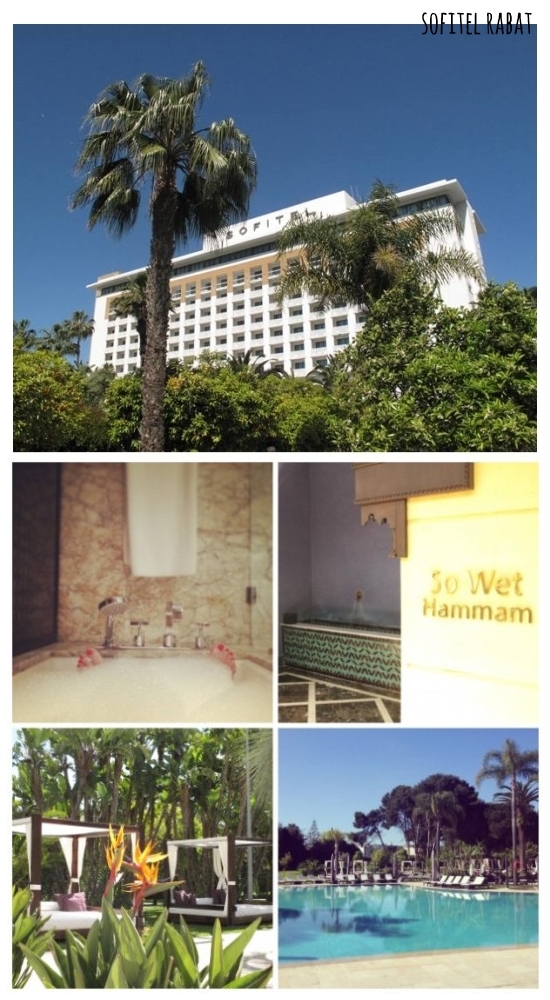 the sofitel rabat jardin des roses is a world away from it’s counterpart in casablanca. surrounded by 17.3 acres (7 hectares) of geometrically laid-out andalusian gardens, architects didier gomez and karim chakor have combined french design with moroccan art on themes of amber, water, roses, mashrabiya latticework and mosaics to create an urban oasis a stone’s throw from the moroccan capital.

we arrived at dusk having spent the afternoon touring casa, and i relished the chance to sink into the giant bathtub in my room, full to the brim with fluffy verbena-scented (l’occitane) bubbles. the following morning we toured the hotel, through the so wet hammam and so spa areas out into the serenity of the scented rose gardens, which were in fact alive with orange groves, laden with fruit.

the palm-shaded pool was calling though and mercifully we were left to wile away the morning on loungers soaking up the rays, taking occasional shelter from the heat of the midday sun under the canopies of  plush daybeds that bordered the garden. sounds blissful, right? it was.

fabric of my life was hosted in morocco by the moroccan tourism board, with thanks to: royal air maroc, mazagan beach resort, sofitel casablanca tour blanche & sofitel rabat jardin des roses 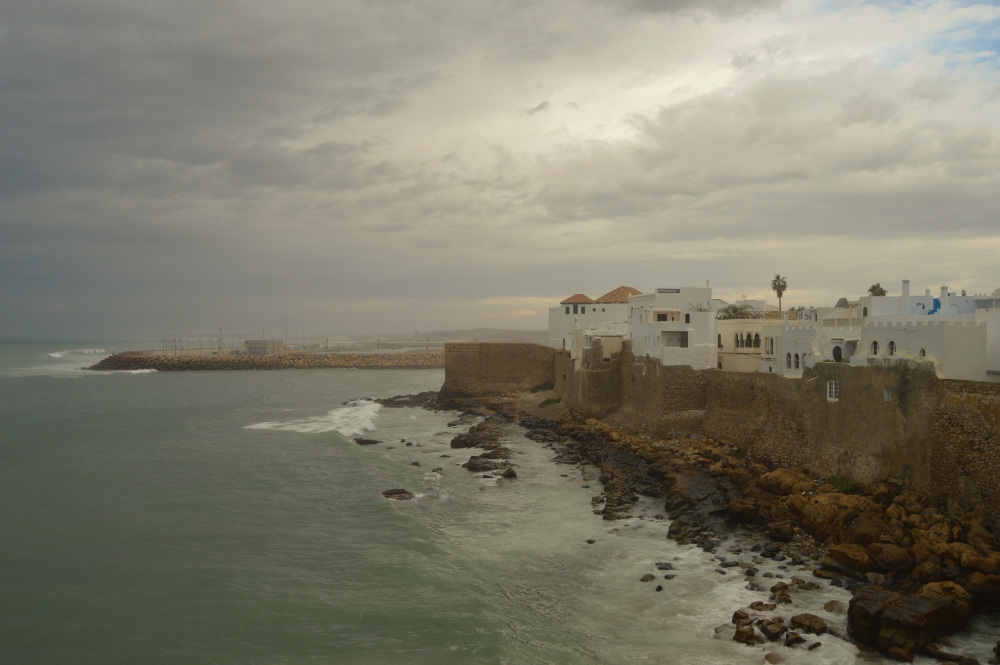 exploring asilah
on November 4, 2015June 13, 2019
previous post
a refuge from the world
next post
slow it down