to not dare is to have already lost 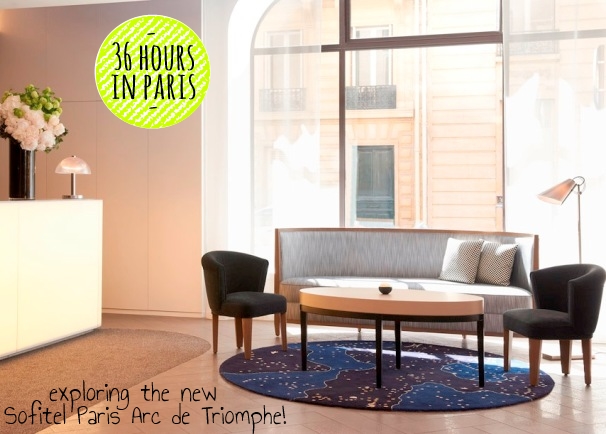 a few weeks ago i was invited to paris by sofitel to experience their recently redesigned arc de triomphe hotel. naturally i jumped at the opportunity; paris is always a good idea they say, even if the trip comes a week before the madness of london design festival!

having stayed at a couple of sofitels when i visited morocco earlier this year i was curious to see how the design and ethos of the brand would present itself in the french captial. behind the beautiful haussmannian façade the newly made-over interior exudes the elegance and refinement of a classic parisian pied-à-terre; full of soft, soothing colours, simple, sleek lines and a subtle play of materials.

re-imagined in collaboration with studio putman, the entire ground floor of the hotel has been transformed for a better use of space and the creation of interconnected public areas which are warm and inviting. perfumed with the scent of hickory, waxed wood and patchouli notes from candles that rami mekdachi has designed especially for the hotel, there is now a new informal bar area adjacent to the hotel entrance designed to welcome new guests and local visitors alike. the bar features a grocery store-canteen concept from local restaurateur josé da rosa, which offers an exclusive menu of hams, taramasalata, wine and other exquisite culinary delights that provide a gastronomic journey through italy, spain and portugal in da rosa’s tradition of excellence, as well as 26 different kinds of tea!

given my inherent sweet tooth, one of the higlights for me was the re-invention of a pastry shop counter situated just inside the main lobby, which offers the “best pastries in paris” – six iconic pastries made by outstanding parisian chefs including a paris brest from la pâtisserie des rêves, a lemon tart by carl marletti, a bamboo by sadaharu aoki, an old-fashioned macaroon by jean-paul hévin, a mont blanc from angélina and the hotel’s signature dessert created by pastry chef michael boivin: a religieuse with a different flavour every month. trust me, it was very hard not to taste-test everything on display, but alas, i was only in town for 36 hours and even i am not that greedy (um…)

at the heart of every sofitel are two core principles: rest and wellbeing. all the rooms feature the eponymous mybed, sofitel’s exclusive bedding concept that makes it feel as though you are sleeping cocooned in a giant marshmallow of fluffiness (far more appealing as that description may sound, i assure you!). the suites also come equipped with an innovative night cove by zyken which diffuses light and sound programmes that are designed to enhance the quality of sleep while creating soothing moments of absolute balance.

the bathroom could actually be called the “wellness room” given that occupies up to half the guestroom’s area and brings about a blissful state of relaxation, wellbeing and harmony. my giant shower cubicle was equipped with one of those divine rainfall-style showerheads that simply beg for you to take your time under the waterfall and luxuriate in your cleansing routine; all pretty easy to do when you have complimentary bottles of luxurious hermès products to lather up with!

we were lucky enough to have breakfast the following morning with olivia putman, andrée’s daughter and studio putman’s artistic director, who shared with us some of the inspirations behind the hotel’s transformation. “we wanted to focus on the classic codes of the parisian apartment, such as parquet floors or the coat peg in the entrance, while offering a contemporary, elegant pied-à-terre. the idea wasn’t to create a place that “feels like home” but, on the contrary, to open up the doors of a parisian apartment that guests can make their own during their stay. they can picture themselves in a robert doisneau or willy ronis photo for a night or a few days. for me, luxury doesn’t depend on the materials’ lavishness. it’s all about friendliness, the thoughtful little details that accompany daily life, and extremely discrete service that protects your privacy.”

it’s certainly safe to say that this is a hotel from which you can make your very own parisian home-from-home. i was very much inclined to just curl up amongst the silk cushions (sporting turgot’s classic maps of paris) on the leather banquette in my room, brew myself another nespresso coffee and set my laptop up to work on the traditional paris bistro table by the window, stopping every now and then to drink in the typically parisian view of haussmannian façades across the street. sounds blissful, right?

but the lure of the city outside called, and with the sun occasionally peeking out from behing the september clouds, i managed to sneak in a little bit of traditional sightseeing alongside my visits to now! le off, musée baccarat and bensimon (posts coming soon, i promise!).

despite having visited paris many times before i hadn’t ever visited the arc de triomphe, so it seemed silly not to pay it a visit this time given it’s proximity to the hotel, and my, my, it certainly didn’t disappoint – just look at those breathtaking views!

i’m hoping to take another jaunt across the channel before the year is out; does anyone have any little parisian gems they’d like to share?