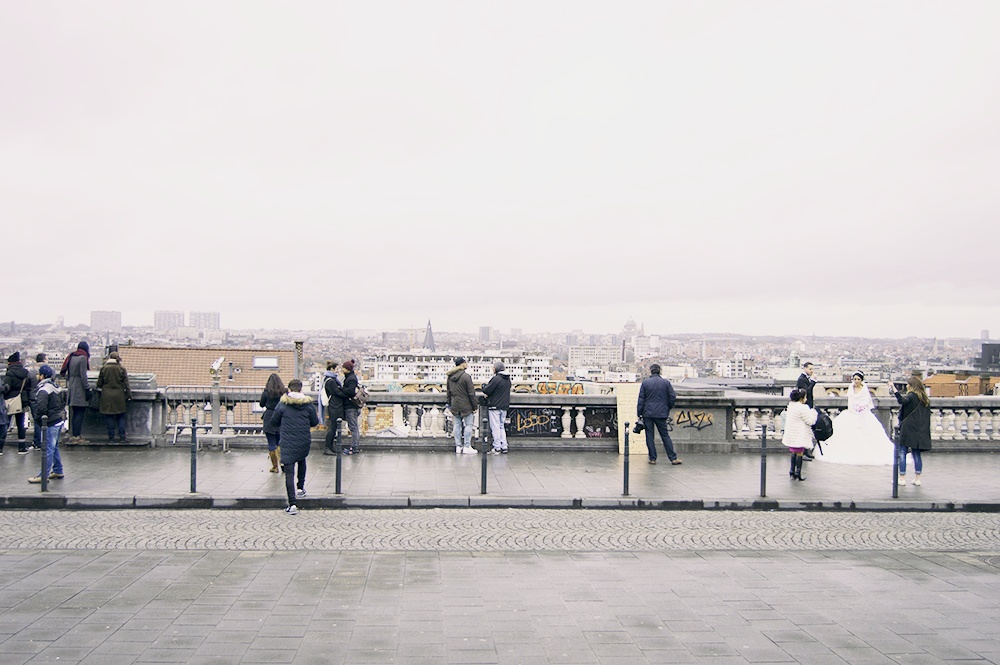 we had precious little time to explore brussels having lost a day of our long weekend to eurostar delays, so in order to make the most of our visit i turned to a few of my belgian friends on twitter and facebook for recommendations on the very best sights, shops, cafés and museums to visit.

the best tip i was given was to check out independent hotspots guide newplacestobe which turned out to be an absolutely wonderful gem of an online guide book, with numerous listings for fab coffee spots, restaurants, bars and shops to visit, not just in brussels but all across belgium. seriously, if you’re planning a trip this summer, make their guide your first port of call when planning your itinerary, as new hotspots are added regularly.

we’d had grand plans to visit eateries such as balls & glory (i’ve heard so many good things about these little handcrafted meatballs!), takumi, les filles, ici and manhattn’s burger joint, but the weather just wasn’t playing ball and our haphazard journey on foot across the city required us taking shelter from sudden downpours in the nearest eatery as the heavens suddenly – and frequently – opened above us, wreaking havoc on our best laid plans. but regardless, we still managed a good portion of our planned sightseeing, so without further ado here’s my selection of the best places we visited during our wet and windy weekend in the belgian capital: 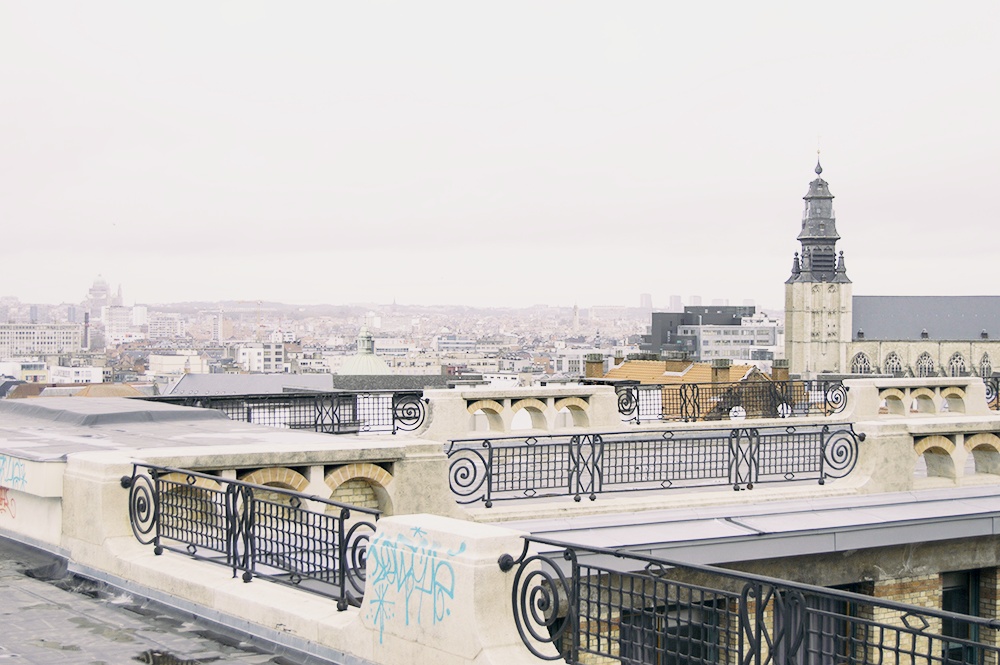 our first port of call on saturday morning was to take advantage of the calm before the storm and take in the view overlooking the marolles from the promenade alongside the palais de justice, a short walk from sofitel brussels la louise where we were staying.

from this vantage point you can see the whole of downtown brussels and the heysel plateau beyond – well, perhaps on a good day with much clearer visibility than we had! but still, even with the grey rainclouds gathering threateningly overhead the view across the city rooftops was pretty spectacular, so much so we even spotted a newlywed bride and groom stopping to have their photograph taken against the dramatic backdrop of the sprawling city landscape. 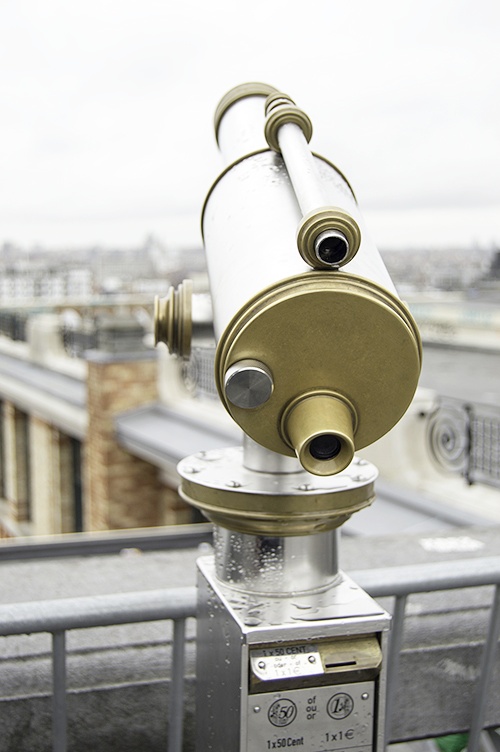 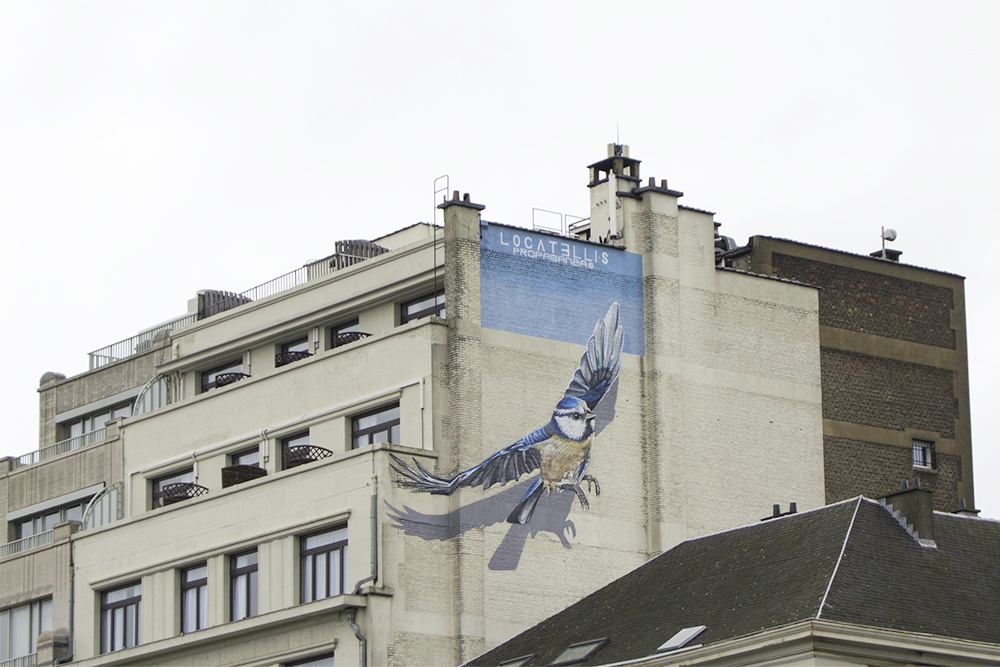 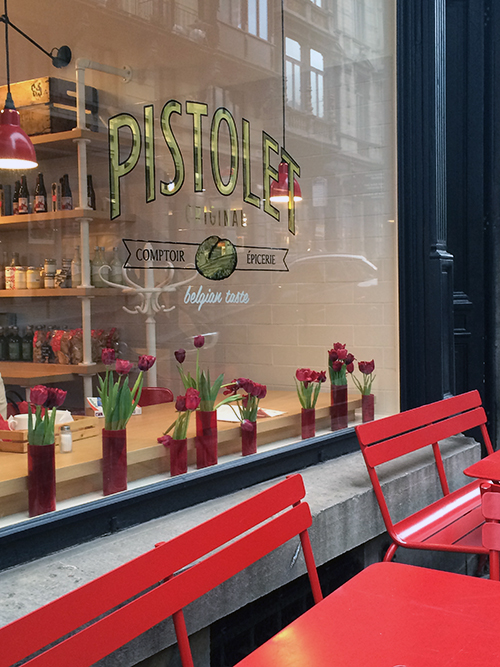 on the face of it, a pistolet is simply a bread roll, which seems like a pretty boring thing to get excited about, right? but it would appear everyone in belgium is obsessed with pistolet: a puffy bread roll that offers the perfect ratio of soft, delicate centre to crispness of crust. if you’re looking to experience this quintessentially belgian speciality then pistolet-original, a high-end delicatessen in the sablon, is your best bet. this cute, cosy café offers all kinds of filled-pistolet options, from homemade steak tartare and grey shrimp from zeebruges to traditional delicacies such as bloempanch (blood pudding), rollmops or a good flemish terrine (‘potjesvlees’).

maison dandoy want to “make your senses twinkle and dance,” offering oven-fresh biscuits that are rich in flavour and sweet in scent. established in 1829, the spectacular array of handcrafted biscuits include the traditional belgian speciality, speculoos, that have made in the traditional way with real butter, brown sugar and handcrafted wooden moulds. these crunchy spiced biscuits certainly have the power to seduce – even this usually dairy-free blogger had to try one to see what all the fuss is about and oh boy, it was a struggle not to go back for more! happily the almond bernardins were dairy-free treats i could indulge in without guilt, and a jar of their confiture de speculoos may have made its way home with me too.. 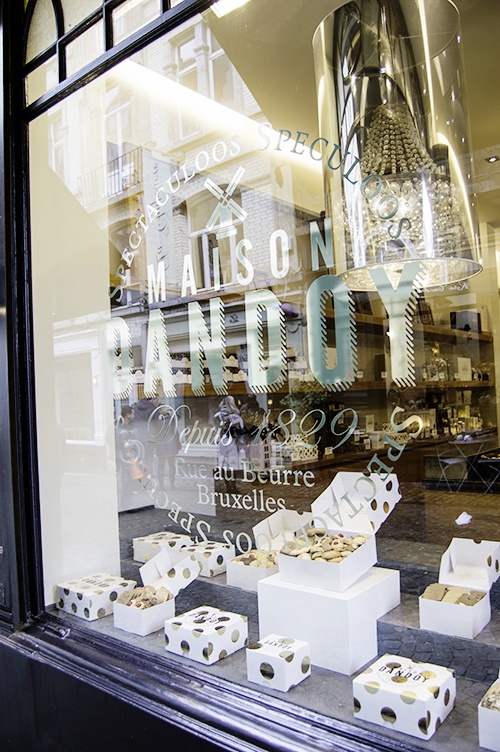 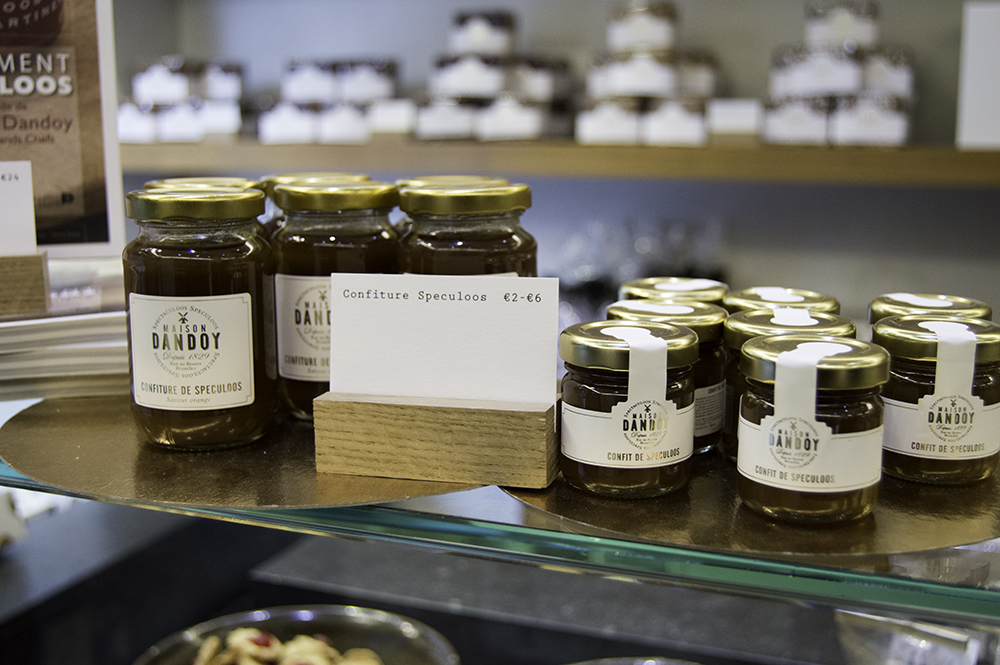 easily one of my favourite discoveries in brussels, the belge une fois concept store is the brainchild of two local graphic designers, arthur and natacha, which brings together nearly 50 different belgian designers in one space. there are plenty of tongue-in-cheek slogan tees, fun illustrated egg cups by atelier jopo and limited-edition jewellery pieces by boudou boudou on display, alongside dapper bow ties by edmunds and cute illustrated notepads, badges and stickers from jon bon and pupa. there’s even a ‘chill & food’ corner at the back which has been furnished with an eclectic array of retro furniture, where you can indulge in a sweet or savoury waffle along with a cup of piping hot coffee, while kicking back to enjoy the buzzing creative atmosphere. the adorable brussels ketjep bottles littering the formica table tops are just the icing on the cake! 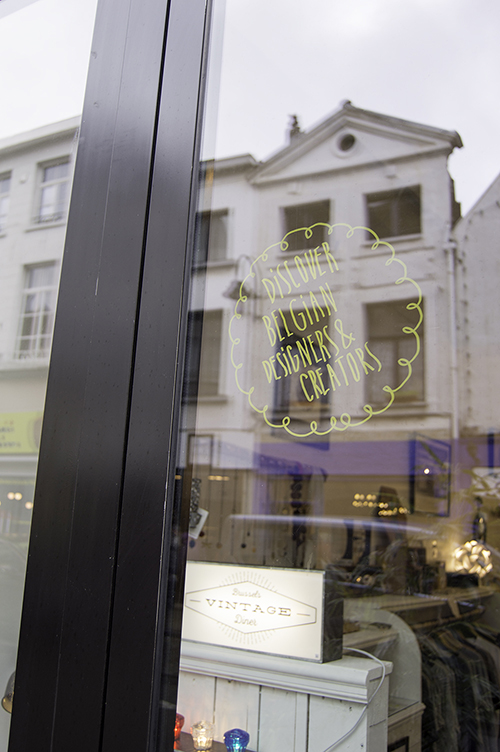 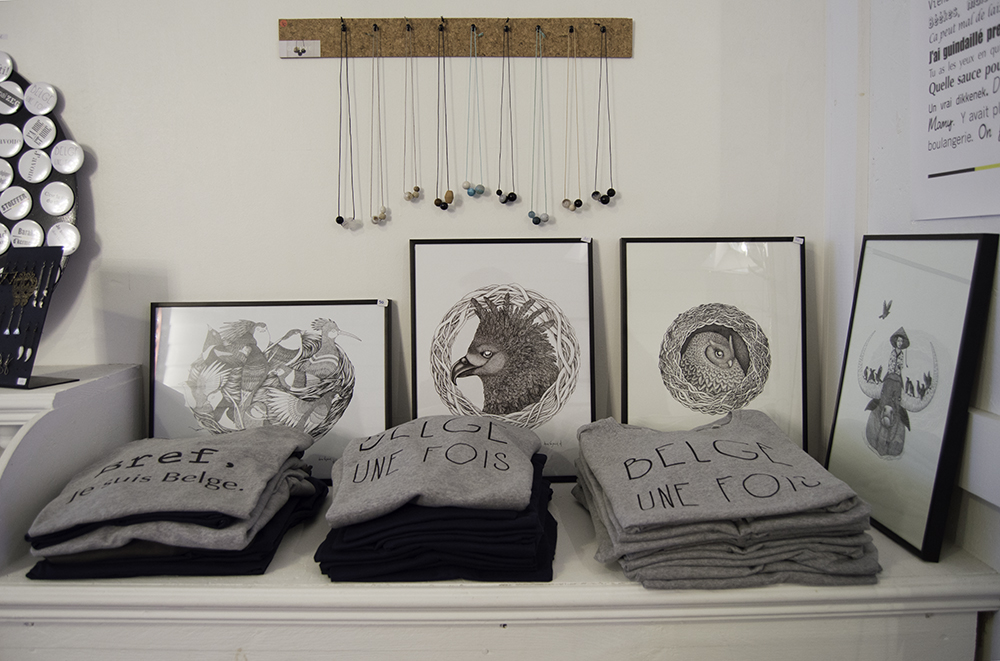 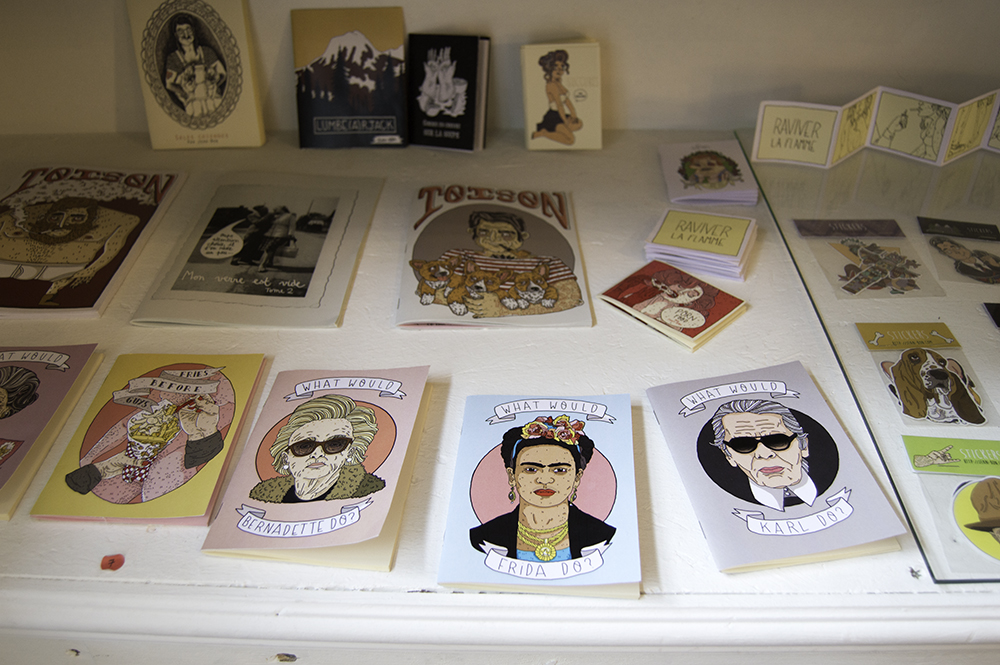 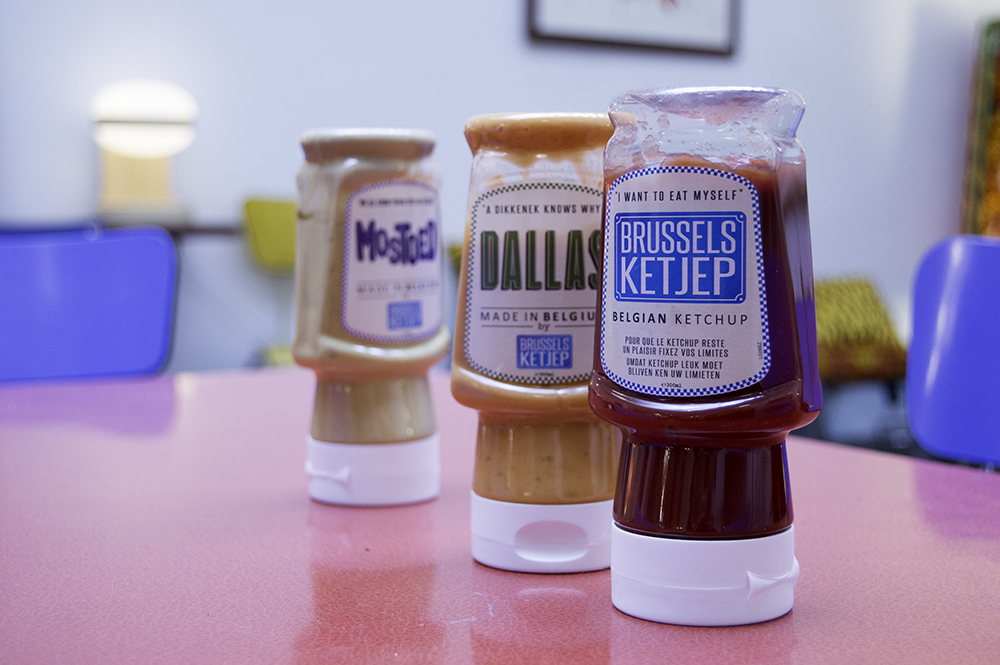 just along from belge une fois we discovered a fabulous café housed in an old industrial building, with exposed brick walls and steel beams. the popular café serving up a selection of bagels and other brunch-time treats runs down the left-hand side of the large warehouse style room, while the rest of the ground floor is full to the brim with stylish furniture and design pieces that are all for sale.

upstairs we discovered clothing lines garçon (for him) and fille (for her) filling the shelves with an eclectic mix of scandi-minimalism and edgy-boho designs. i particularly loved the selection of mojave-inspired accessories in earthy tones and was very tempted by a soft tan-coloured leather rucksack.. but in the end decided to save my pennies for more foodie indulgences! 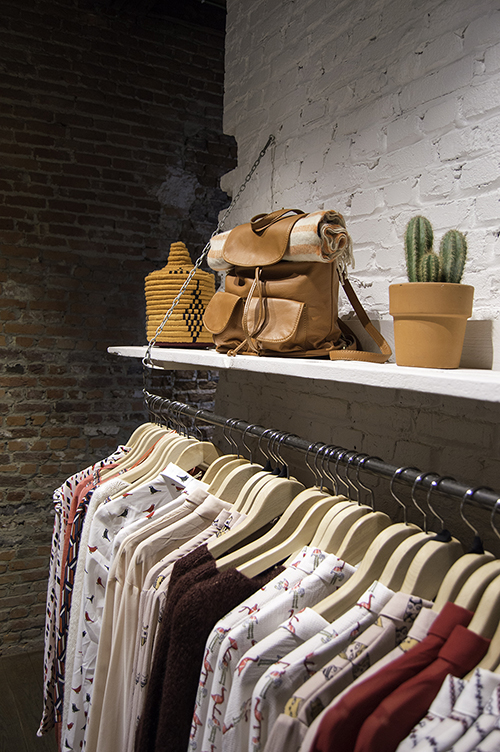 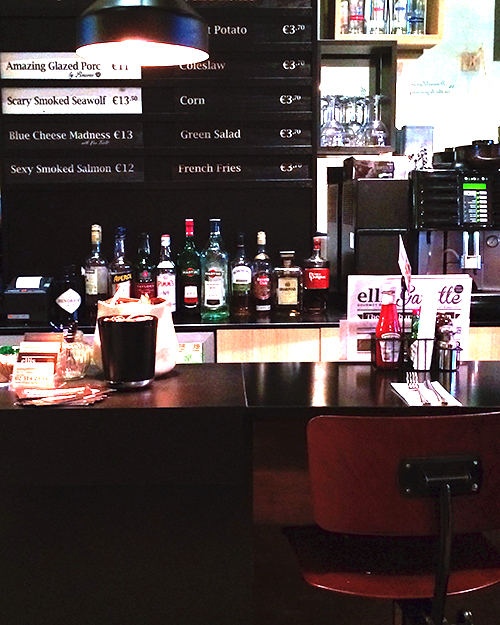 i suspect ellis gourmet burger may be the belgian equivalent of our gbk, but one of their outposts provided a very handy and welcome respite from the rain and served us up a much-needed quick yet tasty burger ‘n’ chips combo on a blustery saturday afternoon.

they have some great burger options on the menu, from the seasonal ‘amazing glazed porc’ served with slaw accompaniment which i indulged in, to 3 different veggie options which delighted my non-meat-eating bestie (who opted for the tasty ‘soy classic’), plus french fries made in traditional belgian style with bintje potatoes – served with lashings of mayo, natch. 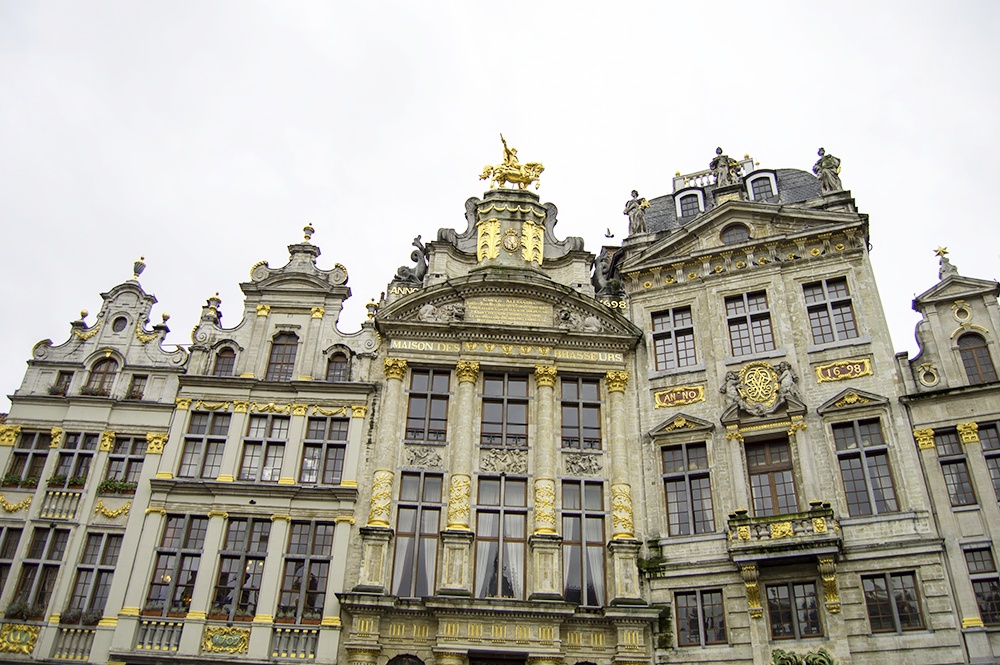 an independent boutique just a stone’s throw from the grote markt, elisabeth chocolatier brings together famous belgian delicacies from all over the country alongside local culinary traditions in a perfect little chocolate box of a shop. having visited our fair share of chocolate shops over the weekend, i can heartily recommend elisabeth as the sweet haven you should seek out if you only have a few hours to spend in the city. from artisanal melo cakes and the real cuberdon noses to frederic blondeel’s divine chocolate truffles and elisabeth‘s trademark ‘broken’ chocolate, it’s difficult to choose just one to recommend trying, but i made my way back across the channel laden with a few packs of crispy golden belgian waffles which were promptly devoured by my work colleagues, so they must have been pretty darn good! 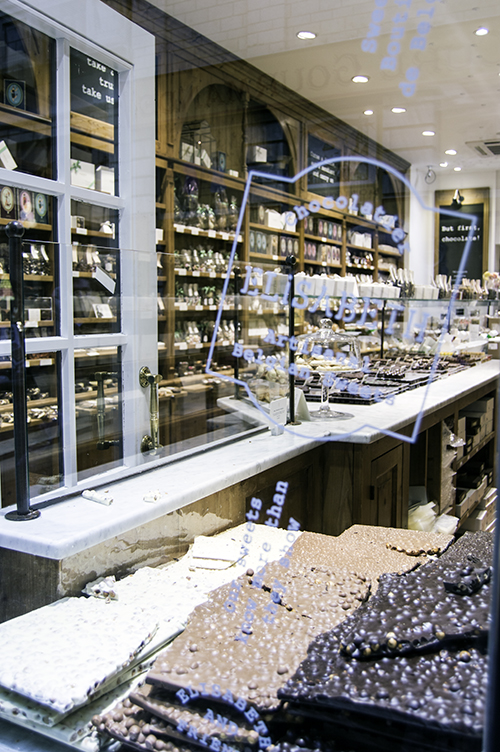 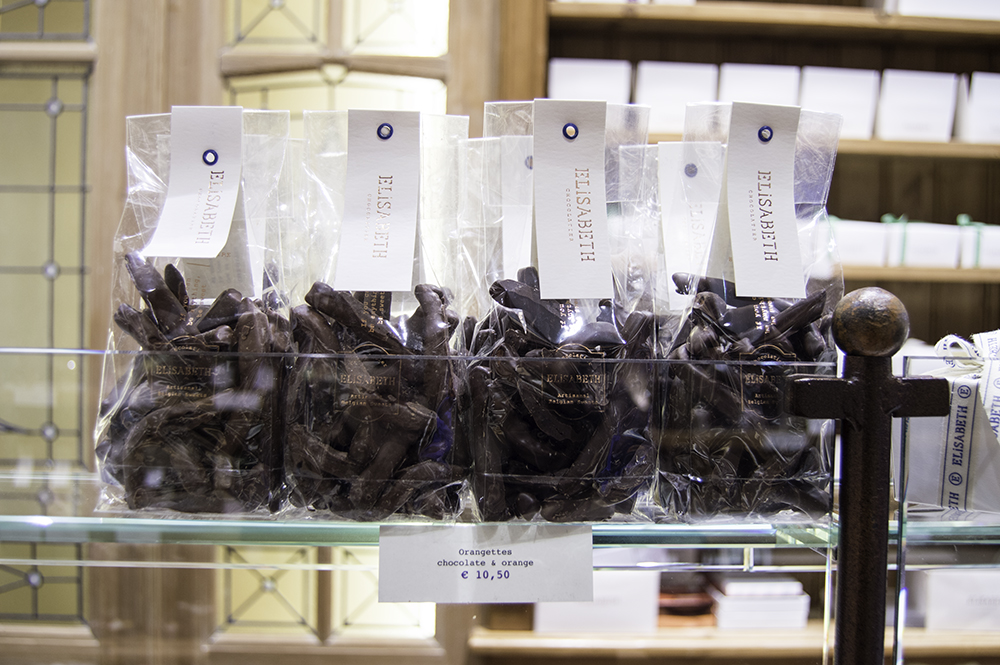 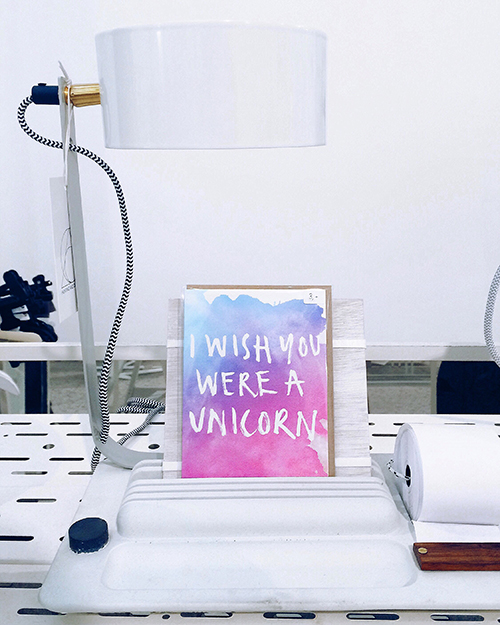 tucked away on a little side street full of cool independent boutiques, the whitewashed interior of contemporary fashion and culture store hunting and collecting is a described as a ‘work in progress’ – an ever-changing canvas for ideas in interiors, atmosphere and retail experience which is refreshed twice a year. bringing together trendsetting clothes and objects from international design brands, the space houses a stylish mix of fashion for men and women alongside lifestyle items and an impressive selection of fashion-forward sports footwear.

next door to hunting and collecting we discovered the beautiful decor store diito, a furniture and interior gallery meets showroom, bringing together exciting new designers alongside more established european design houses such as muuto, &tradition, tom dixon and carl hansen.

there’s also a pleasing selection of beautiful vintage pieces too, creating a wonderful design haven it is all to easy to lose a few too many hours (and euros) in! 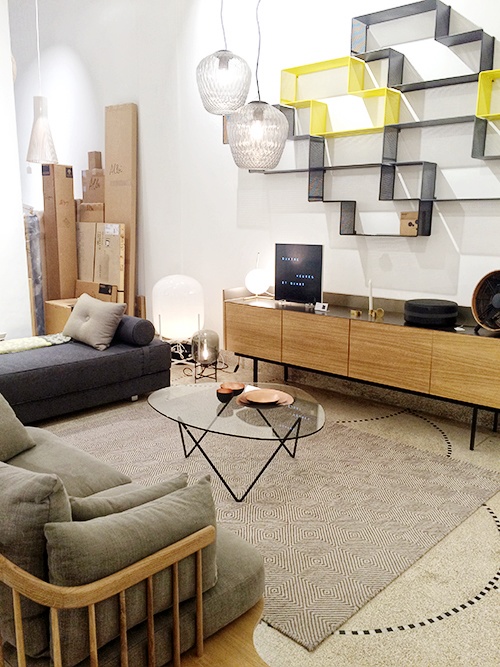 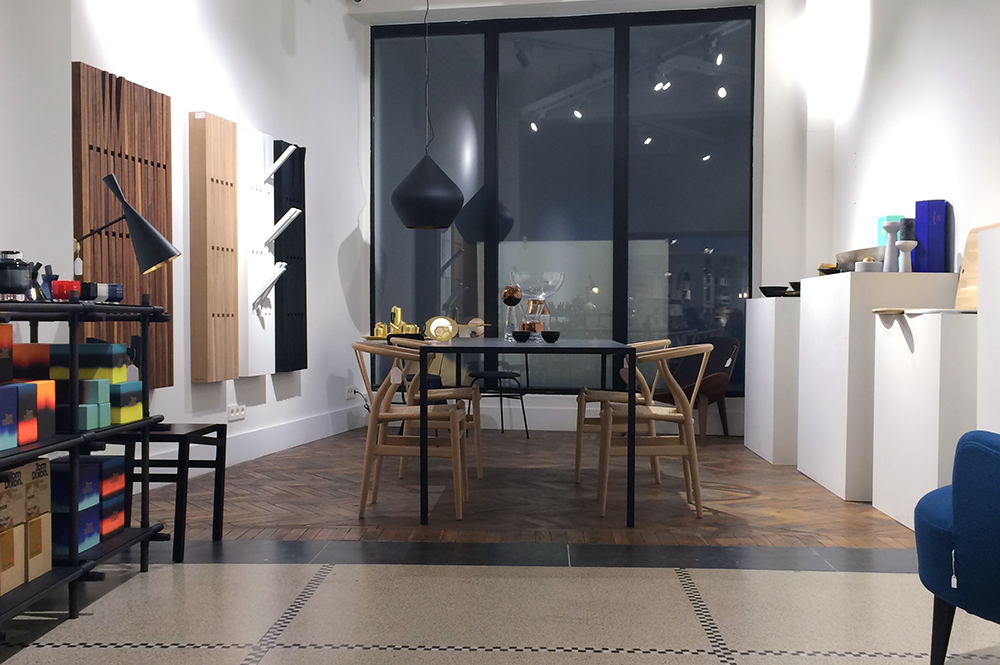 we discovered chouconut via a recommendation in eurostar magazine and immediately knew we had to seek it out and sample their delectable-looking petit choux buns. the pretty art-nouveau patisserie is run by baker giovanni and baptiste, who fill these plump beauties with a dazzling array of flavours, from an intriguing sounding green apple, balsamic and raspberry to more traditional caramel au beurre salé.

they also sell a range of confitures and pates a tartiner; a jar of incredibly tasty praliné noisette chocolat may well have found it’s way home with me… 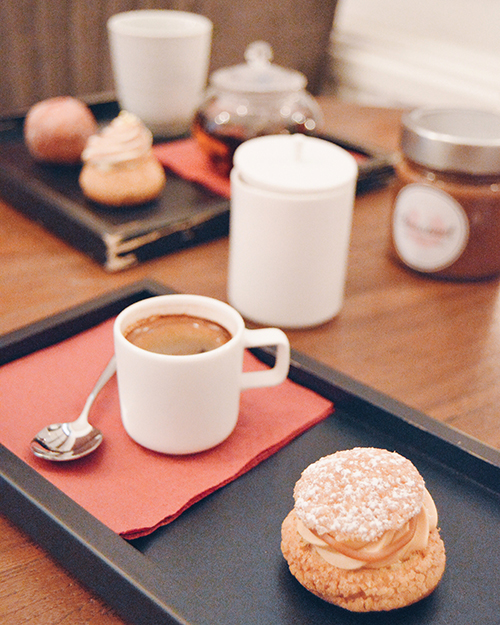 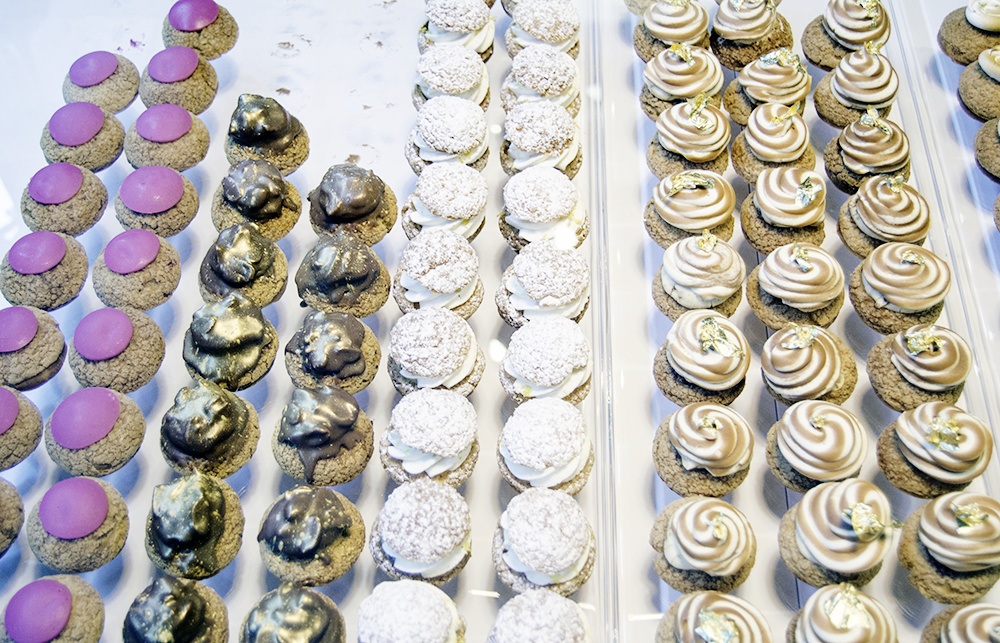 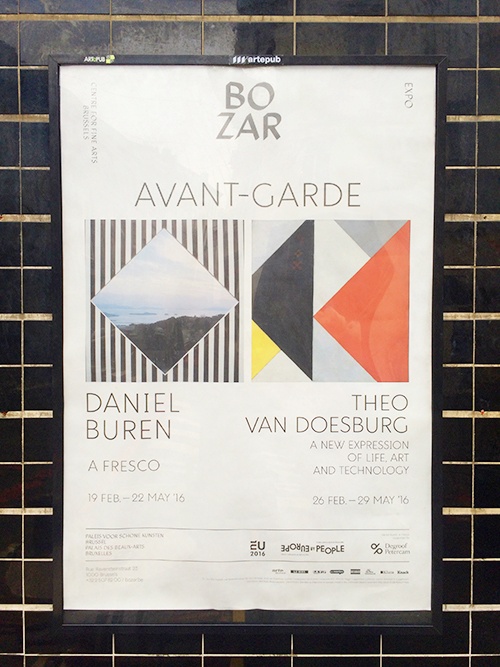 i was really excited to visit the bozar centre for fine arts to see the new daniel buren exhibition, as he’s an artist i’ve always been fascinated by – not hard to understand really, given my love of stripes!

since the 1960s, french artist buren has developed an oeuvre characterised by his vertical stripes motif inspired by french café awnings. the often short-lived nature of daniel buren’s works – with 80% being transitory – mean a classic retrospective of his work would have been impossible, so buren came up with an original solution to the problem by imagining a scenic drive through his inspiration, featuring more than 100 artists from the 20th and 21st century who have had an influence on his own career, including paul cézanne, jackson pollock, fernand léger, pablo picasso and piet mondrian. 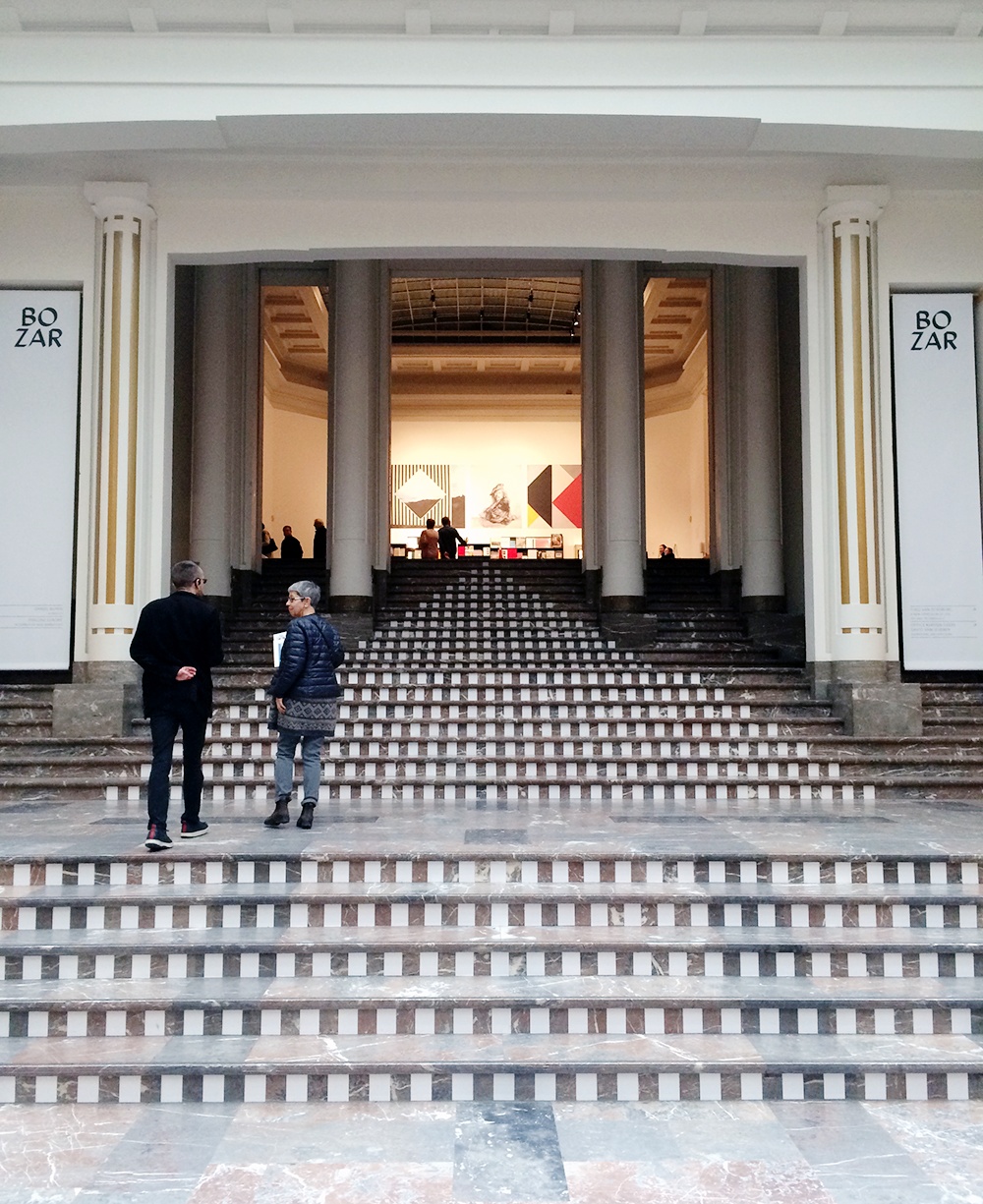 the innovative presentation appeared alongside a fascinating new film which offered a complete panorama of the artist’s temporary and permanent installations over the years (although sadly almost entirely in french, with no english subtitling -boo!)

i’d certainly recommend the exhibition if you get the chance to visit though – take a cushion to sit on as the seats for the video presentation are incredibly uncomfortable (especially as the film runs to around 1½ hours) and make sure you have another hour or so to wander the exhibition and get to grips with the layout; 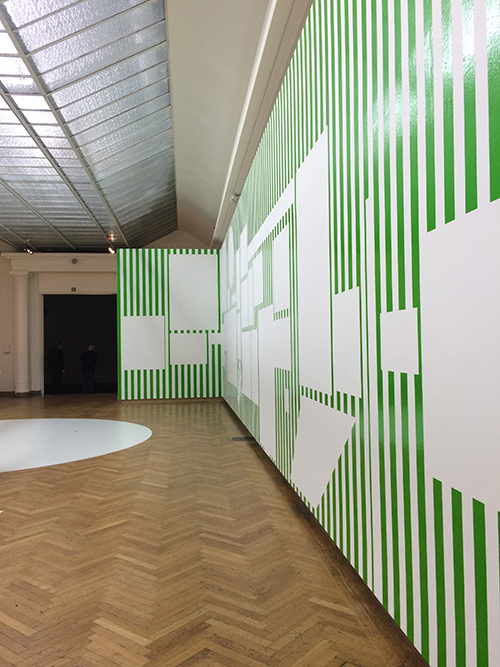 i’m sure i’ve missed a few gems off in my whistle-stop guide so please do let me know of any top tips you might have that i should check out on my next visit to the city!

my 2-night stay at sofitel brussels le louise was provided free-of-charge by accor hotels, however my trip itinerary and photography are my own. 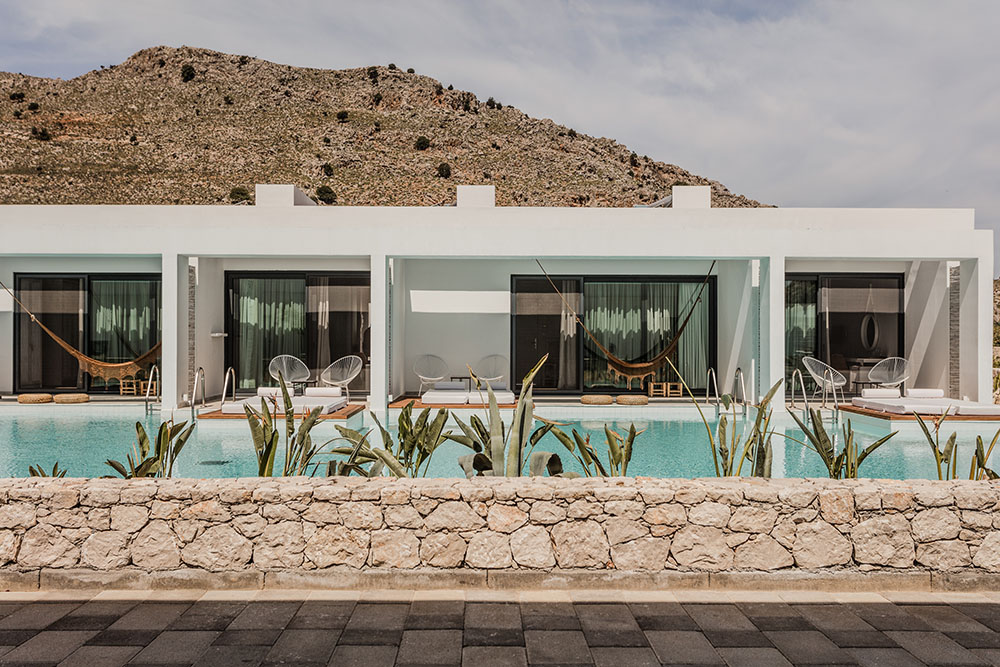 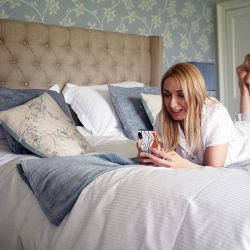 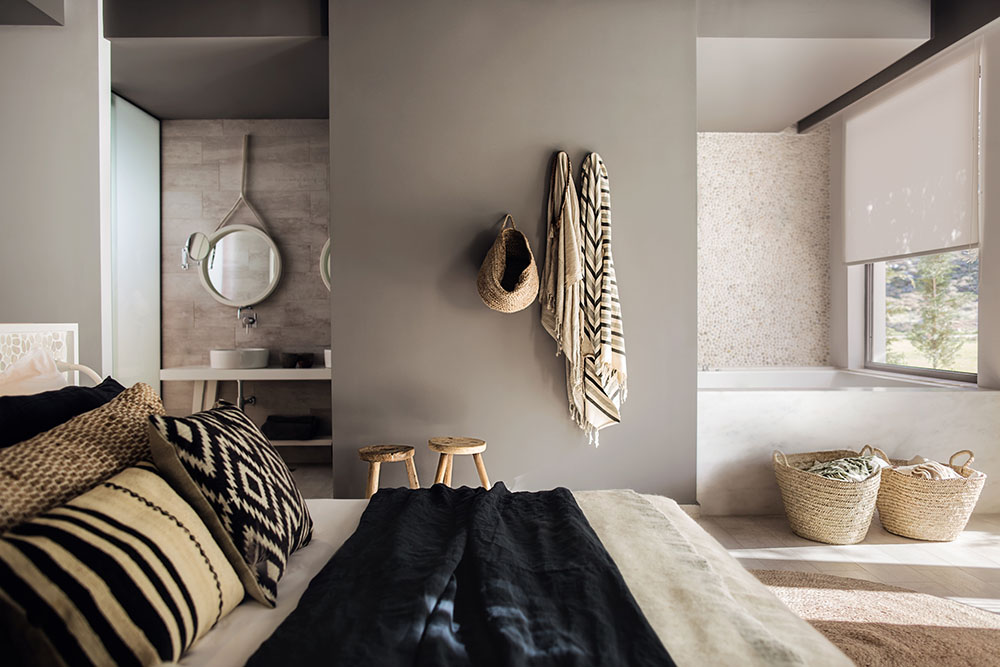 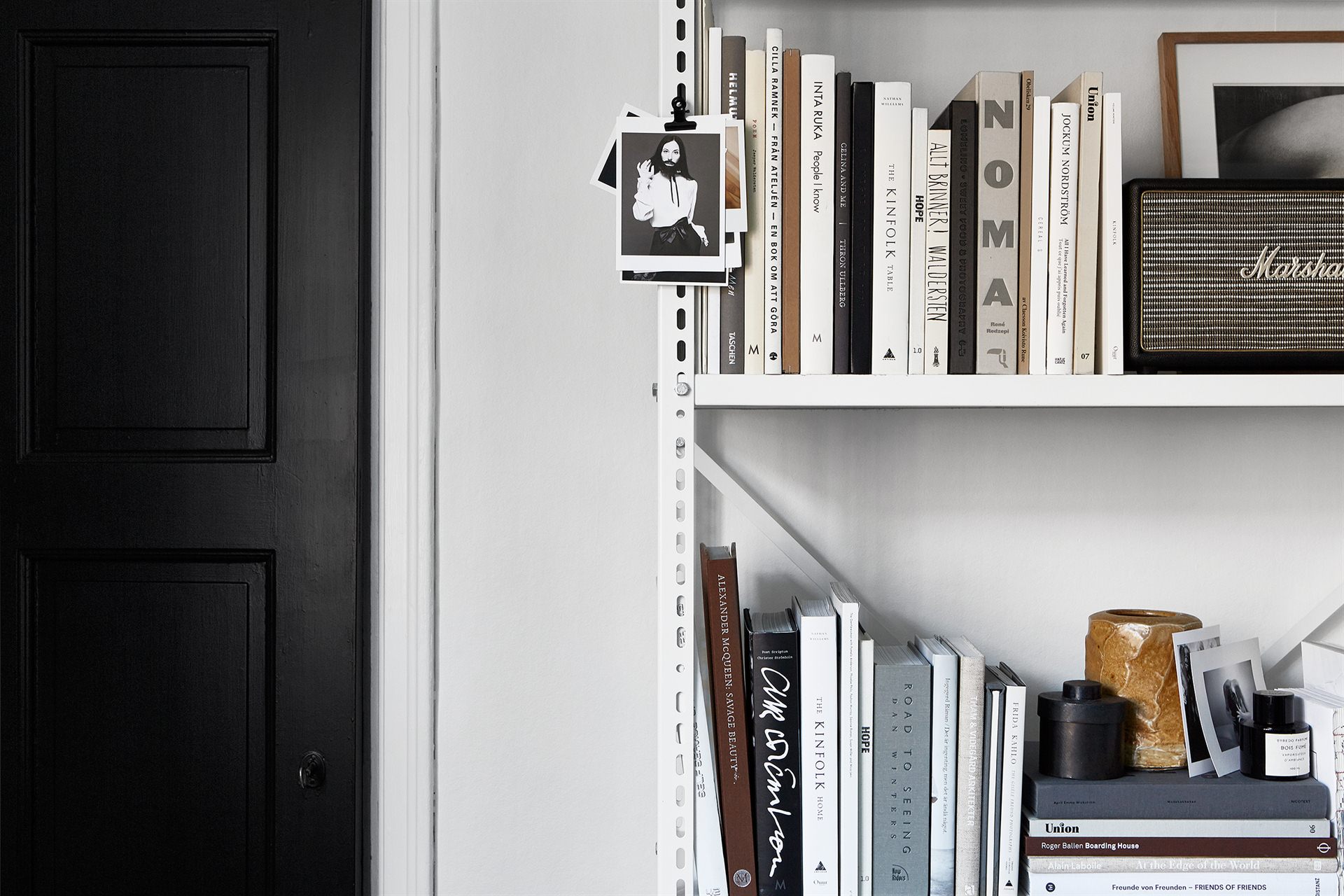 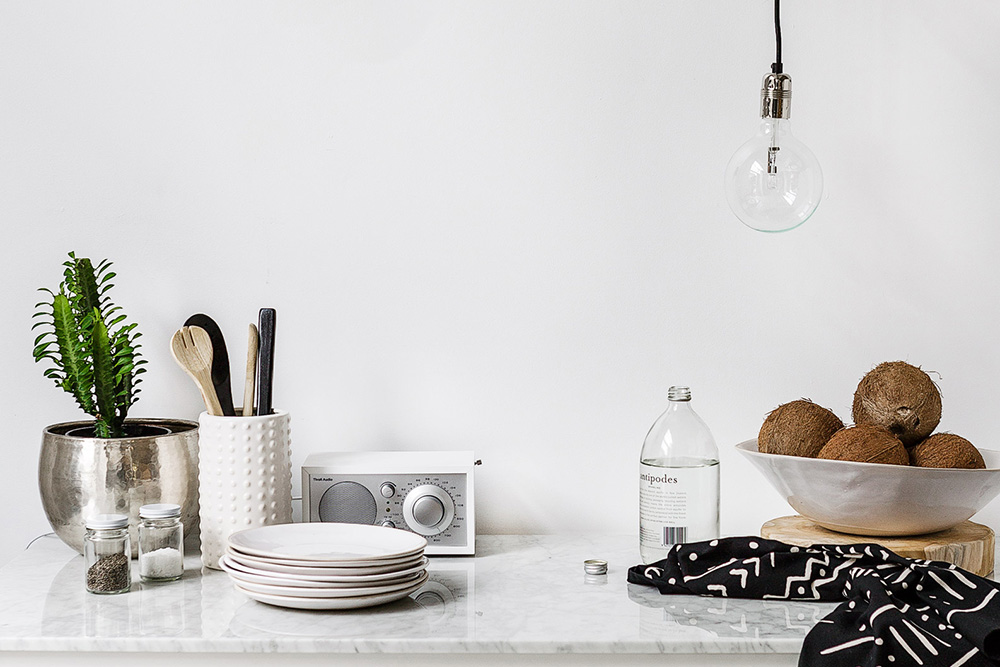