eating my way round town 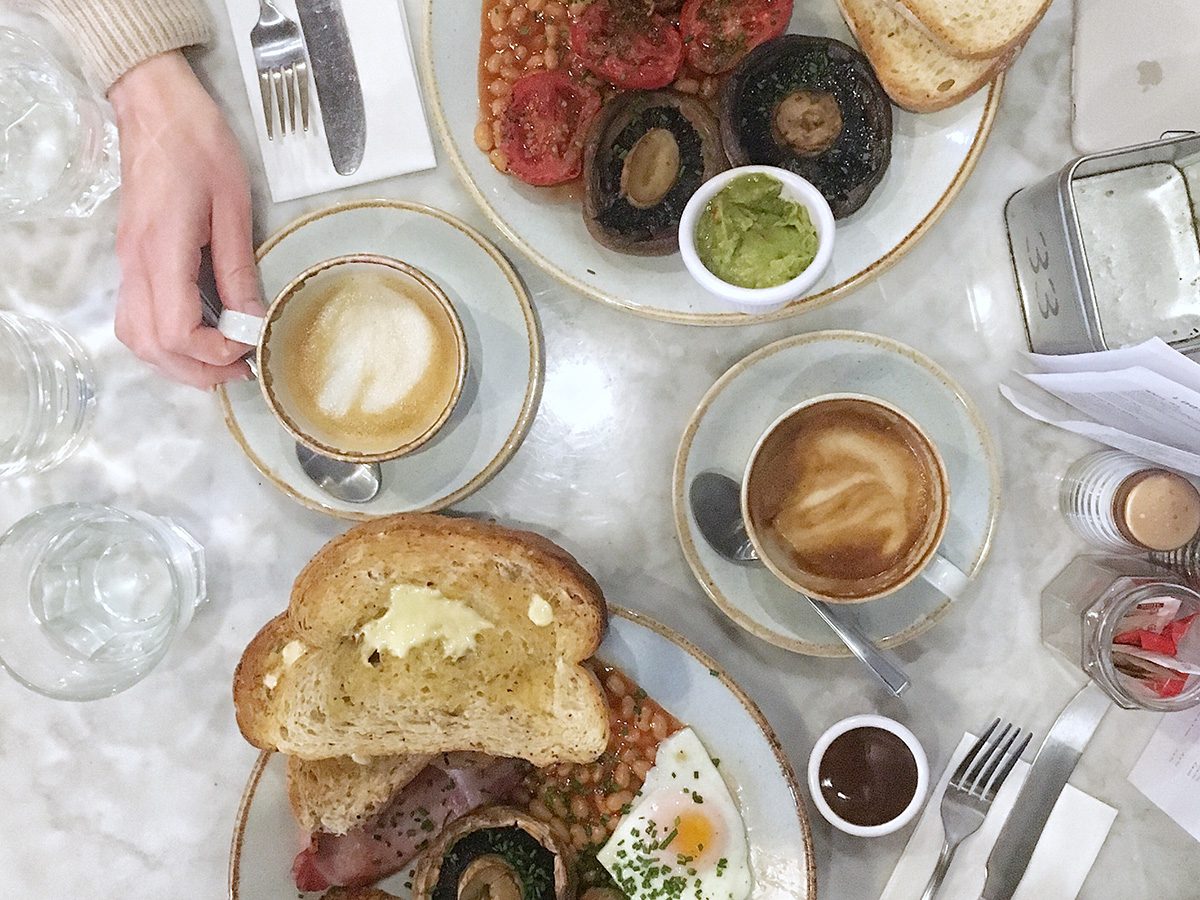 i think i’ve made eating my way around manchester’s vast and extensive selection of cafes and restaurants my ultimate mission in life. in putting together this round-up i’ve been scrolling back through my photostream, vividly recalling each fabulous meal (both the food and the company!), which can only really be a validation of why i feel compelled (like every other milennial, lol) to take snaps of my food before eating.

i’m going to put together a few meal-specific round-ups shortly (brunch, sunday roasts etc.) but to start with i’ve compiled the top ten places i keep going back to, because if my repeat business isn’t validation enough of their place on this best eateries in manchester list, i don’t know what is! 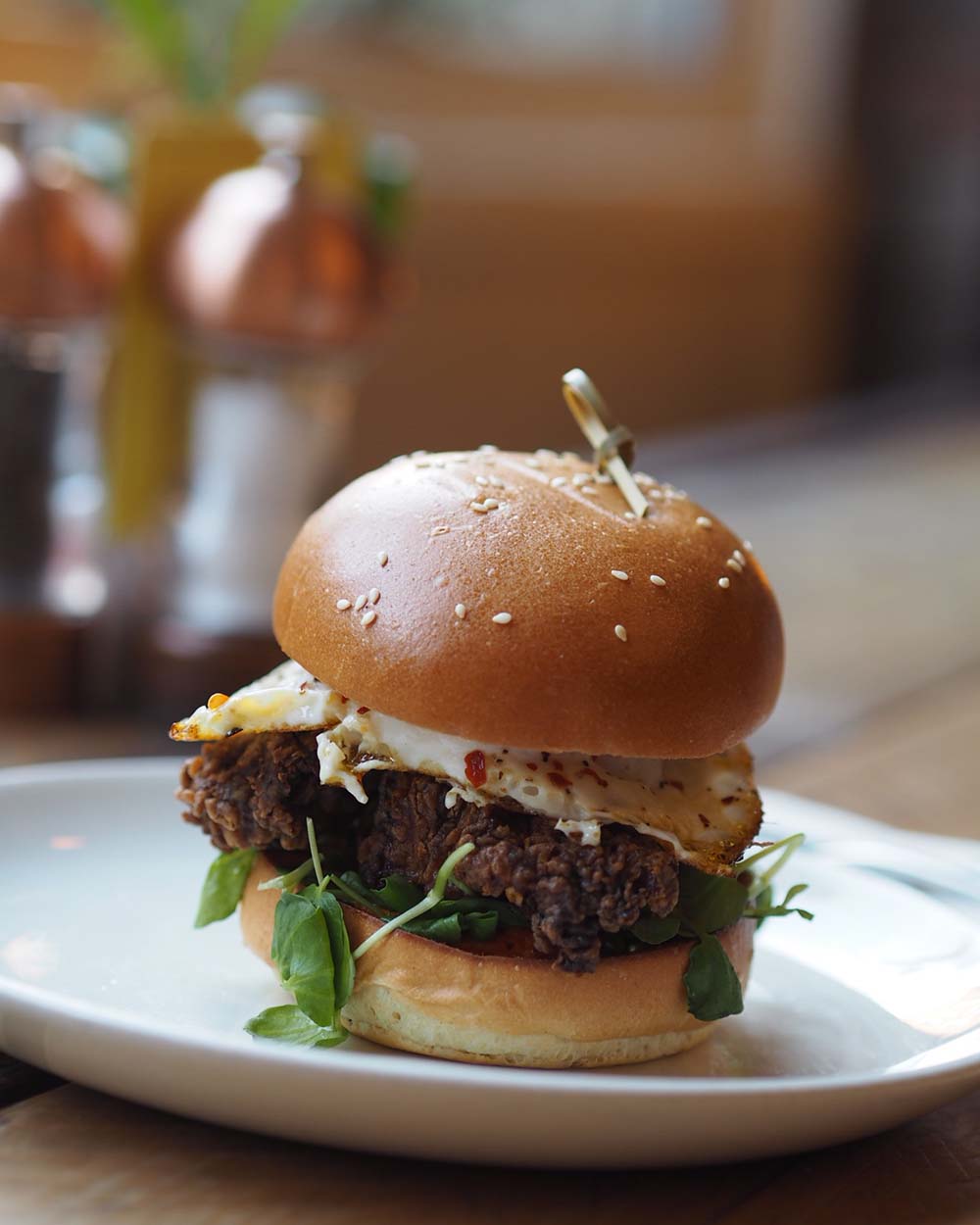 if there’s one place i mention to everyone who asks for a foodie recommendation in the city, it’s evelyn’s. designed by ian haigh, central design studio, this neighbourhood restaurant takes its cues from all-day eateries in the likes of williamsburg and melbourne, offering a laid-back vibe with lots of natural hues and plenty of greenery. the menu is an innovative, eclectic fusion, with plenty of antipodean and indonesian influences; their ricotta pancakes with honeycomb butter are widely regarded as the best in the city (at least by my friends), and the taiwanese fried chicken roll (pictured) is legendary. i’d also heartily recommend the crab & shrimp burger, and would certainly suggest a perusal of the g&t menu.. spruce pine & plum, anyone?

antipodean coffee bar federal will shortly open a second outpost of their popular cafe down on deansgate, which is happy news indeed to all who throng to its current tiny premises near shudehill. their brunch menu – and in particular the avocado toast – pulls in both locals and tourists from far and wide, and i can certainly see why! as well as the aforementioned smashed avo, there’s corn fritters, banana bread with mascarpone and vibrant acai bowls, all packing in the flavour whilst being beautifully presented, and therefore hugely insta-worthy. the coffee, from kiwi-founded ozone roasters, is also damn fine too. 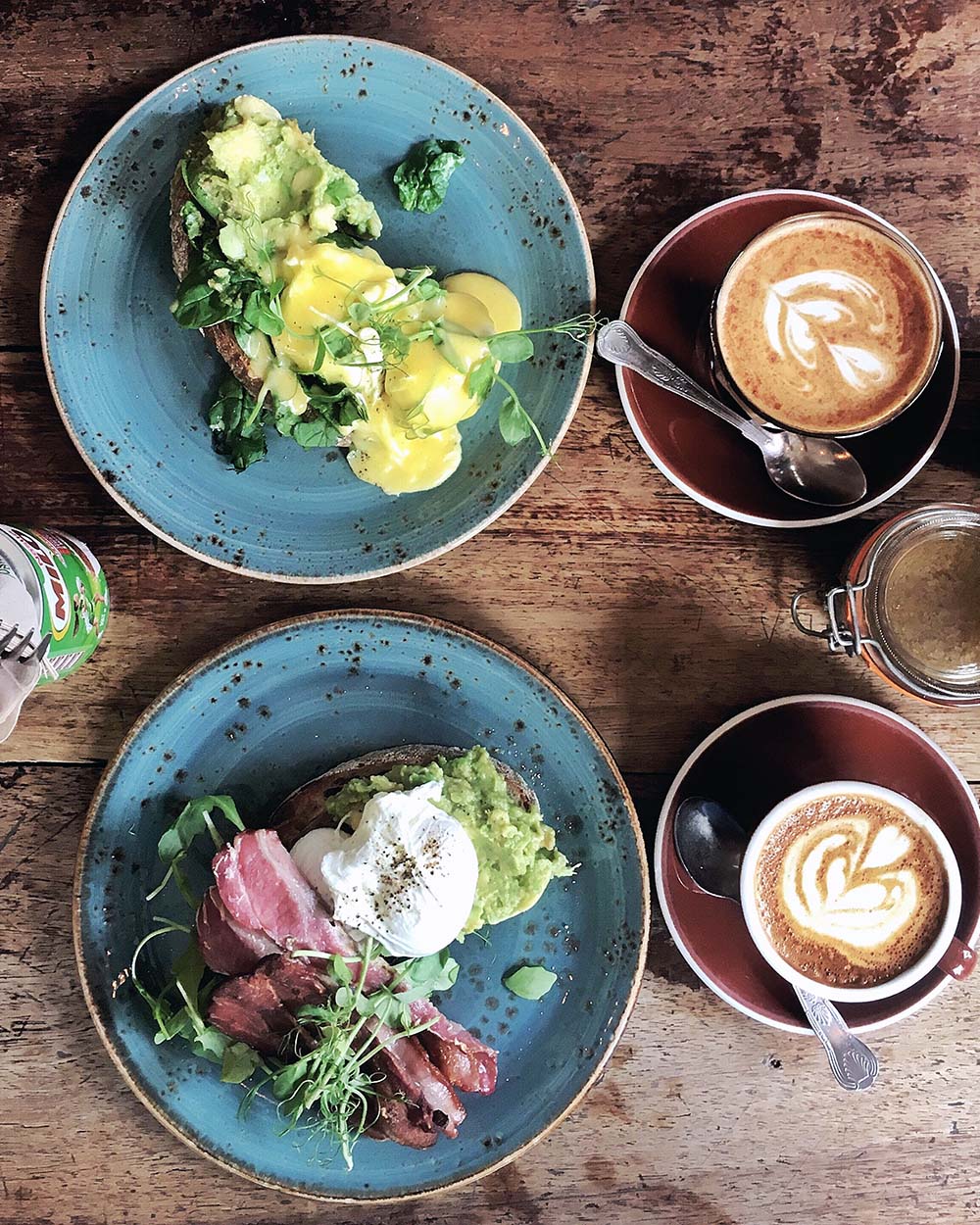 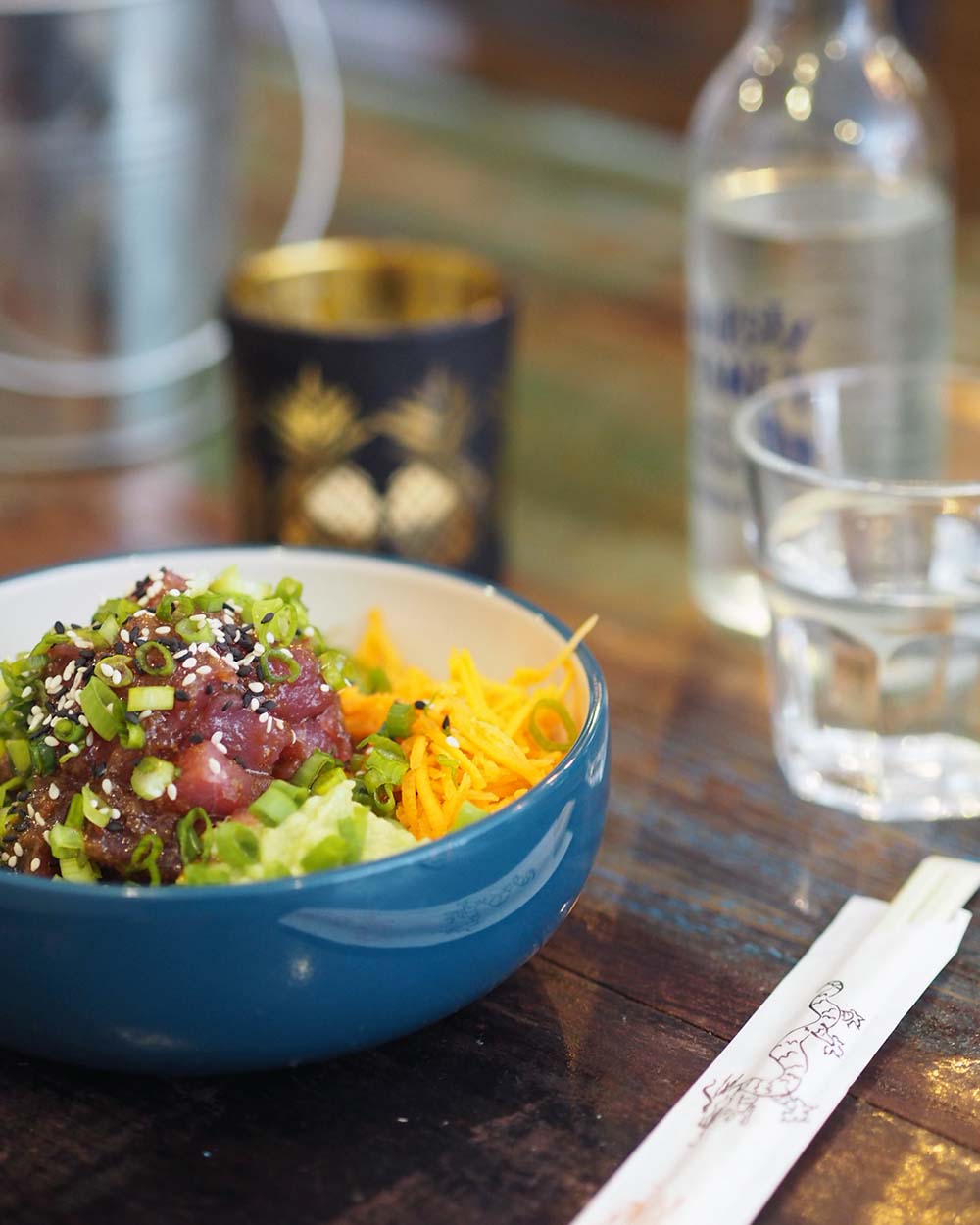 i swear i’ve been to oké poké for lunch at least once a month since they opened in summer 2017 and still haven’t moved past the first dish on the menu, it’s that good! bringing the finest hawaiian street food to the northern quarter is the mission, and i can honestly say i’ve not found better in any of the major cities i’ve visited. comparable to a deconstructed sushi bowl, poké offers a healthy and flavourful alternative to an everyday lunchtime salad, and options range from the classic ahi with tuna (my go-to) to lomi lomi (quinoa/salmon) and a tofu-tastic vegan option. you can also opt for a pokérito – essentially a large sushi roll – and wash it down with one of the fresh smoothies, protein shakes and juices on offer.

leaf on portland street is the manchester outpost of liverpool venue on bold street. a tea café at it’s heart – offering over 60 varieties of loose-leaf tea – leaf is set in a large, airy, cavernous space over two floors, with a menu that takes you right through breakfast – with an excellent vegan fry up – to lunchtime sandwiches and soups, then afternoon tea and (plenty of vegan) cake. it’s not all about the tea though; the space plays host to plenty of cultural gatherings and activities, with their basement area often given over to workshops, exhibitions and performances. it’s a space that has a continual buzz to it, but where you can while away an afternoon happily uninterrupted (save for top-ups on your tea), with your nose in a book, or perhaps even penning your own bestseller. 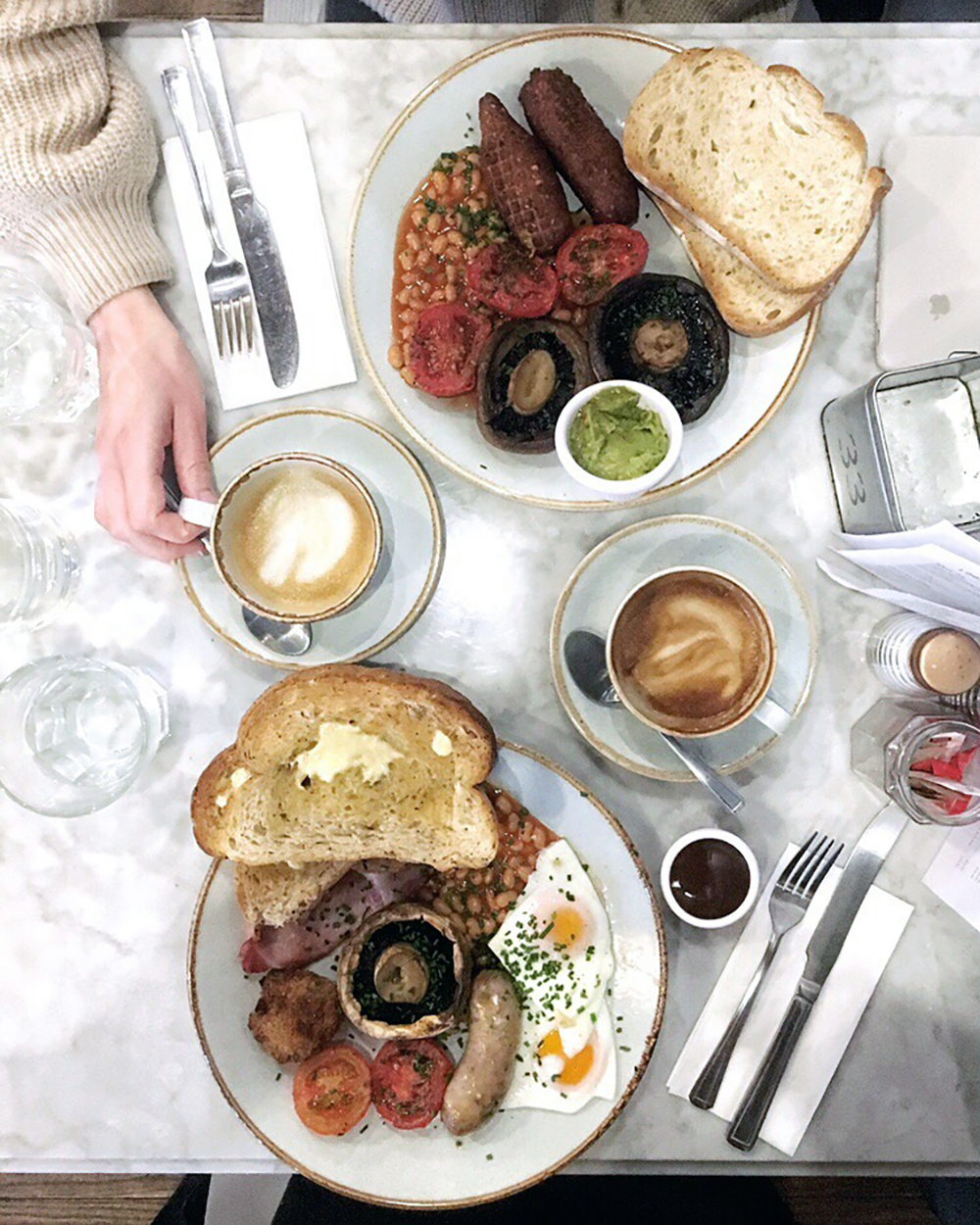 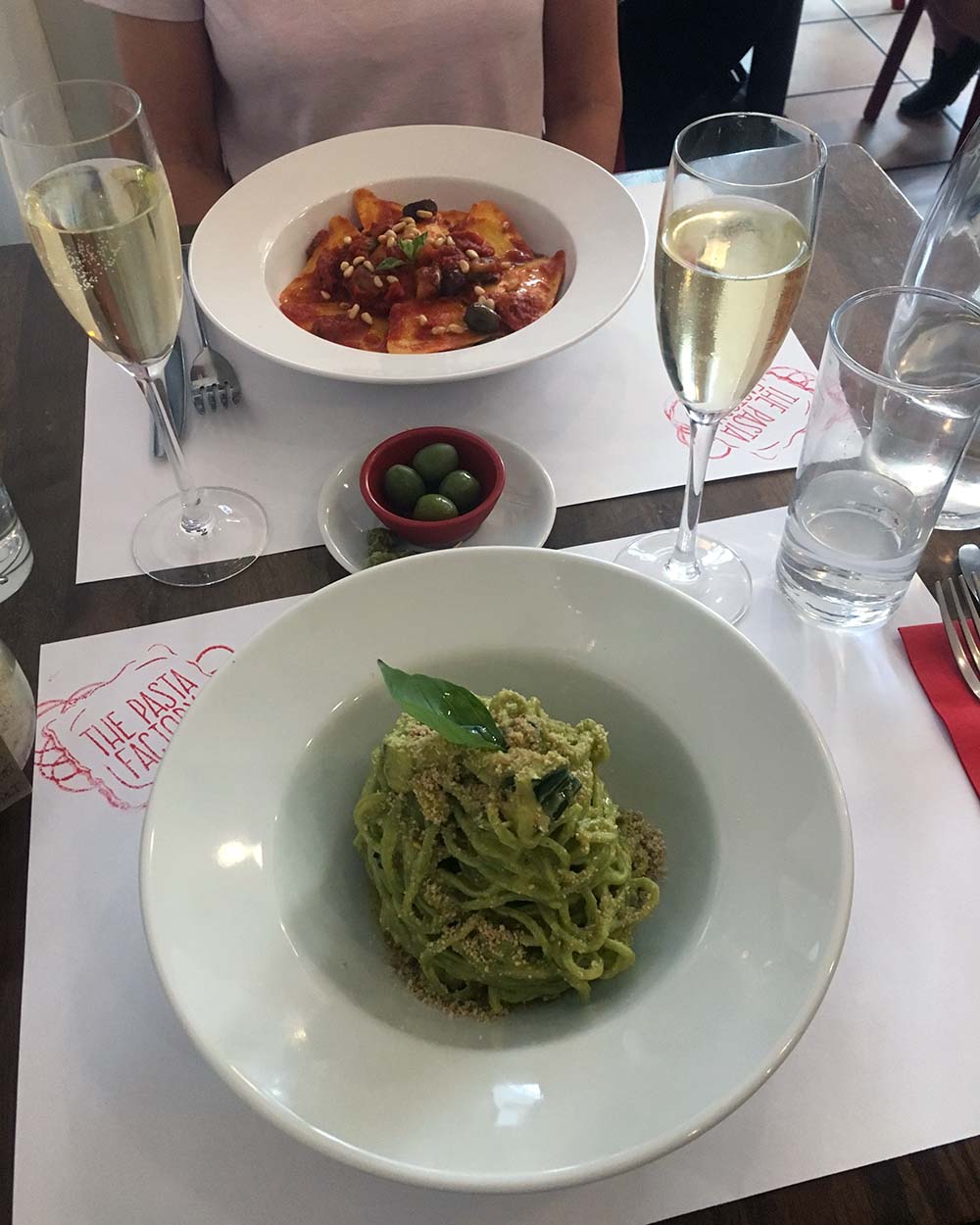 i think you really only come across the pasta factory through word-of-mouth in manchester. housed in a former bank near shudehill, the exterior is unassuming and logo so garishly nineties that you would be forgiven for walking straight past and not giving the restaurant the culinary time of day. but you’d be wrong. the pasta factory offers a truly authentic italian dining experience and once inside, you’d be forgiven for thinking you were at a family trattoria on your holidays. the menu offers a range of traditionally hearty and light freshly flavoured options, and their vegan spaghetti verde con crema di zucchine is simply to die for, topped with their homemade vegan parmesan which can be bought in jars (in bulk if you’re like me) from the deli at the front.

sister to the pasta factory, noi quattro is a traditional pizzeria italiano on the outskirts of the northern quarter, which opened late in 2018. following the proper neopolitan tradition, pizza is cooked in a wood oven built in napoli  for less than 90 seconds, although the dough starts life two days earlier and is made using a very low percentage of yeast and slowly fermented, making it really easy to digest. alongside a wide range of traditional pizza offerings, including several vegan options, noi quattro also serve o cuoppo; a traditional italian street food served in a cone-shaped paper comprising potato croquettes, vegetables, courgette flowers, mozzarella bocconcini, and zeppoline (fluffy balls of dough), all cut and fried in a light batter. trust me, this dish is worth the visit alone! 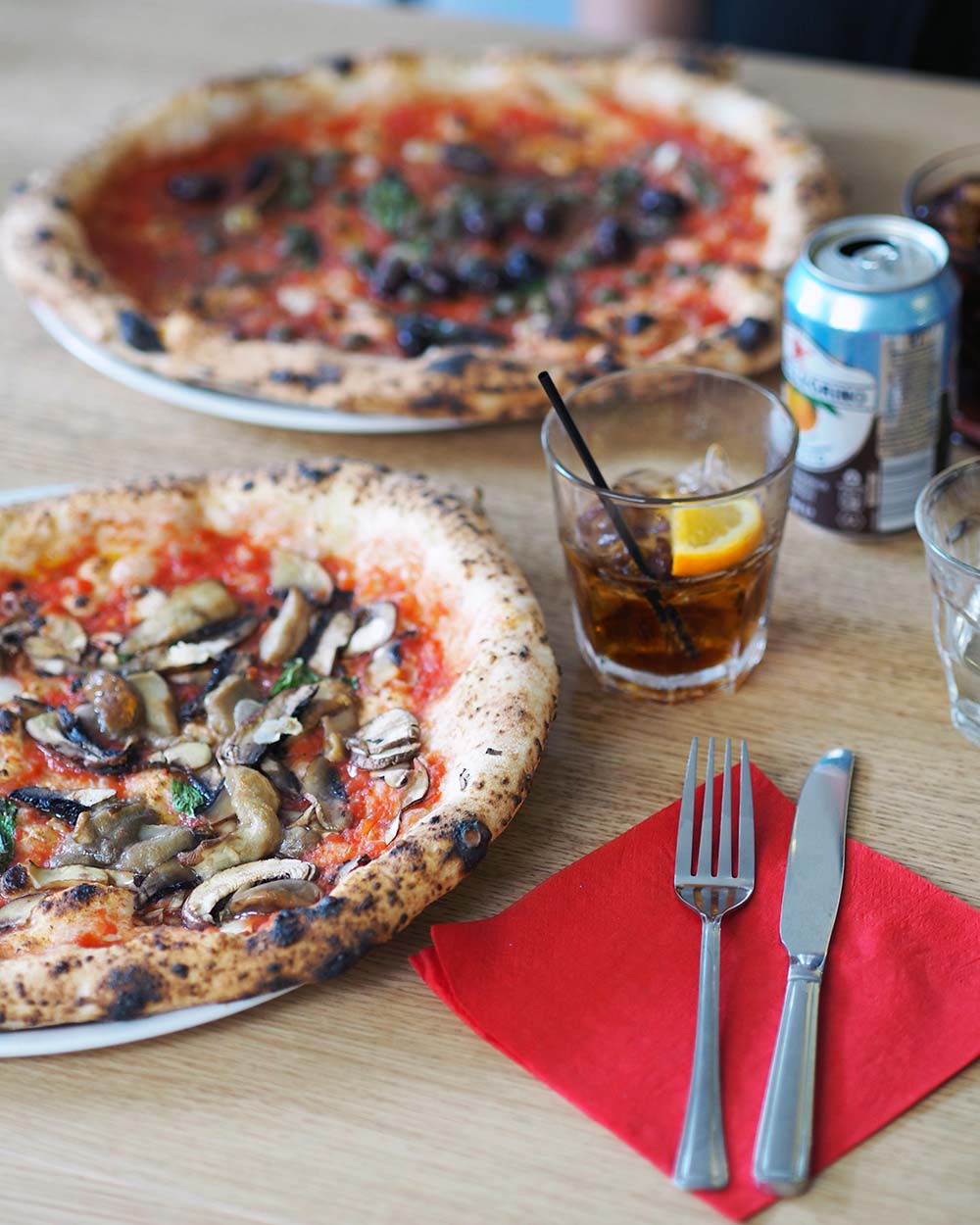 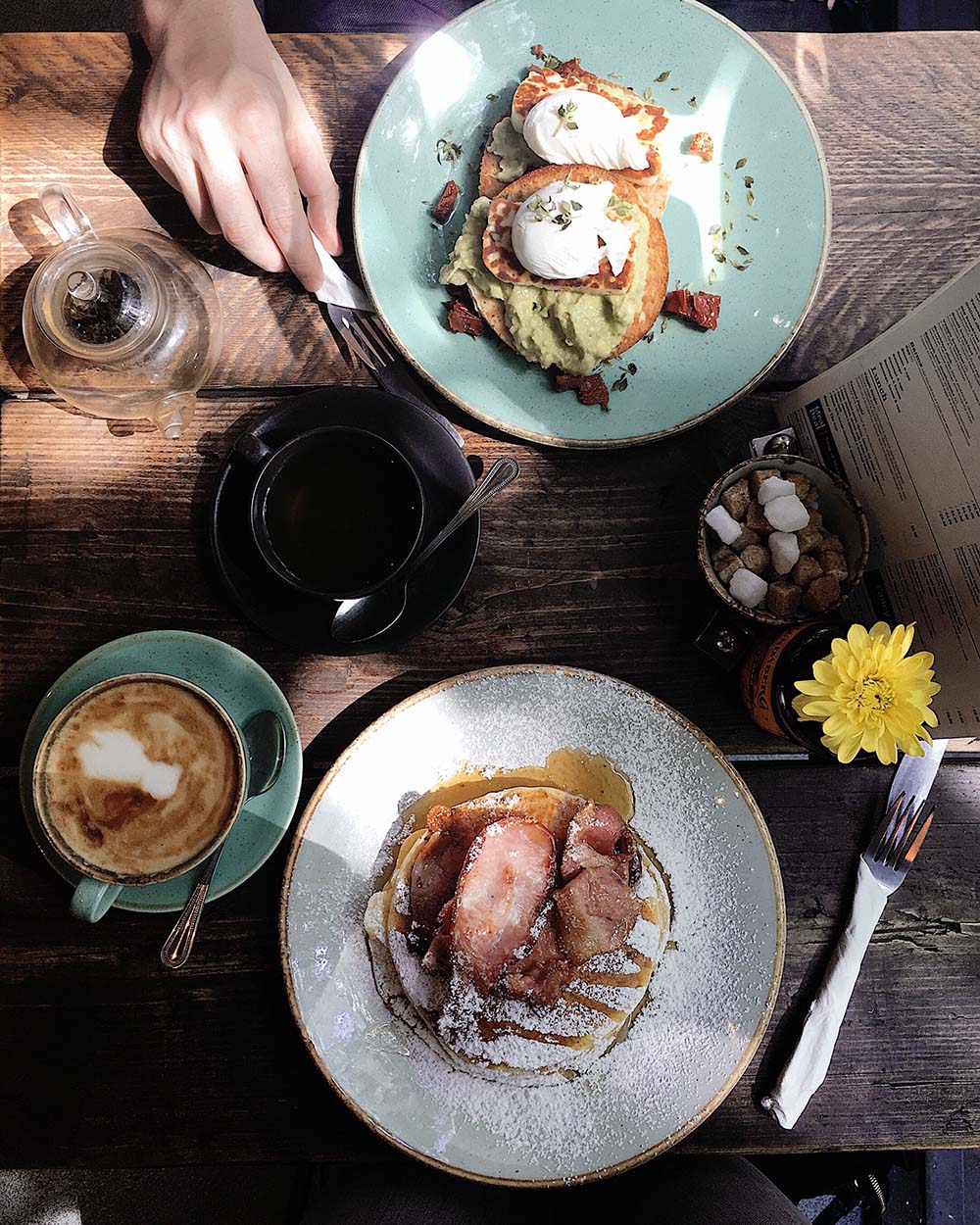 a hugely popular brunch spot in the northern quarter, 19 cafe bar is a laid-back, unassuming coffee shop offering delicious pancake stacks, open bagels, eggs benedict and classic english fry-ups featuring what might arguably be the best sausages in the city (so i’ve been told). coffee is from local roasters heart and graft, and the vibe is distinctly nq meets brooklyn, with exposed brick walls, bare bulbs, large open bar and plenty of raw pallet wood. on a nice sunny day it pays to grab yourself a spot at the window to do a bit of people watching, but if there’s a group of you then the snug booths to the rear of the restaurant feel intimate and cosy.

first recorded in 1212, “elnecot” was the original name for the area now known as ancoats, where present-day neighbourhood bar & kitchen elnecot is located, serving up small plates of deliciousness. opened in late 2017, and named ‘best new restaurant in the uk’ at the british restaurant awards 2018, it’s a sleek industrial-style space with a 44ft concrete bar that runs into an open kitchen, long communal dining bench tables, orange upholstery and an abundance of neon lighting. chef michael clay’s menu revolves around locally sourced, seasonal produce, divided into nibbles, balls, meat, fish, veg and afters. i’ve been a couple of times now and have thoroughly enjoyed every dish ordered, but would particularly recommend the aubergine & mint balls, pork belly with savoy kimchi, pig head croquettes, oh – and whatever you do, be sure order a side of the lemon & thyme roasties! 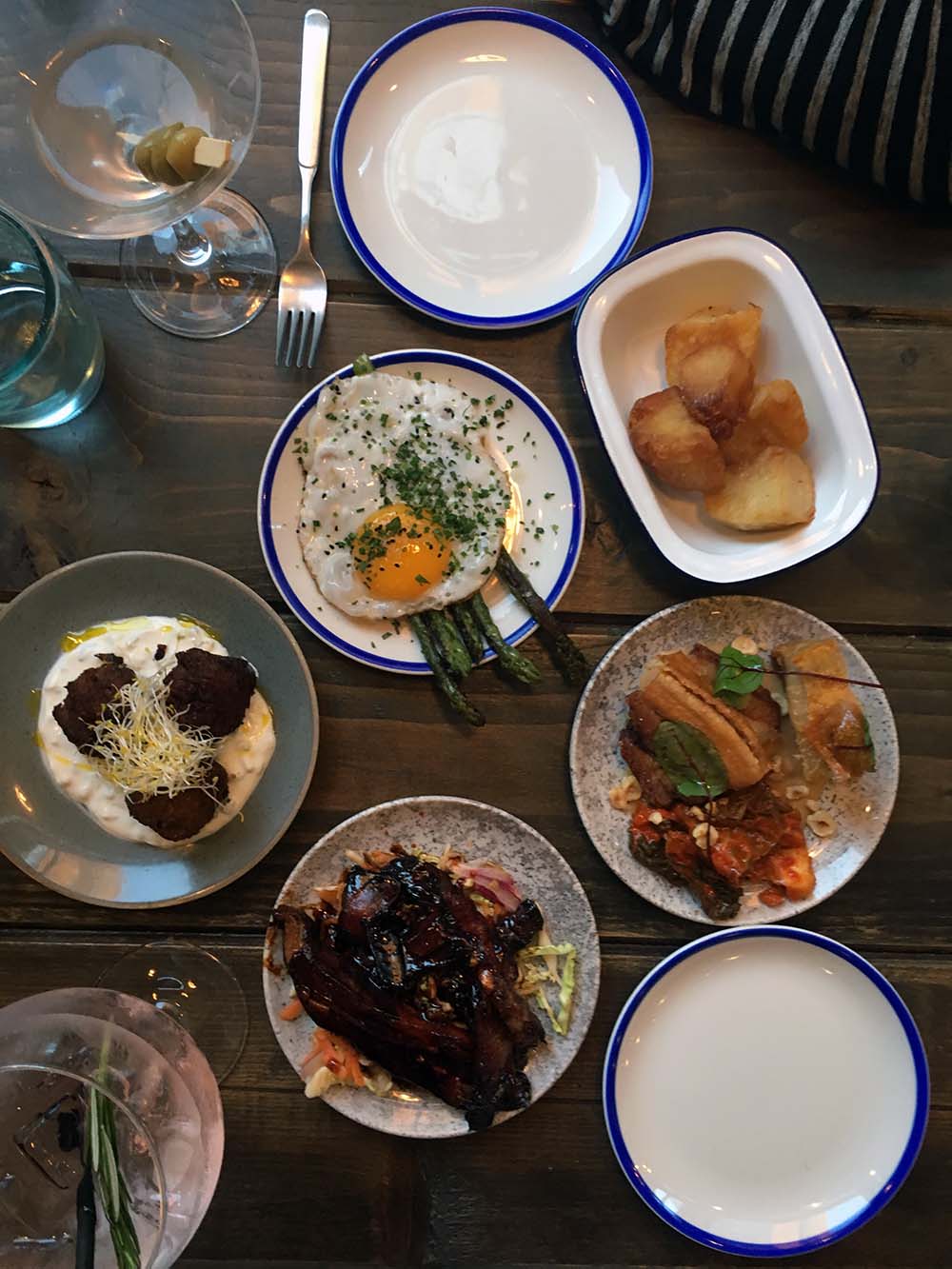 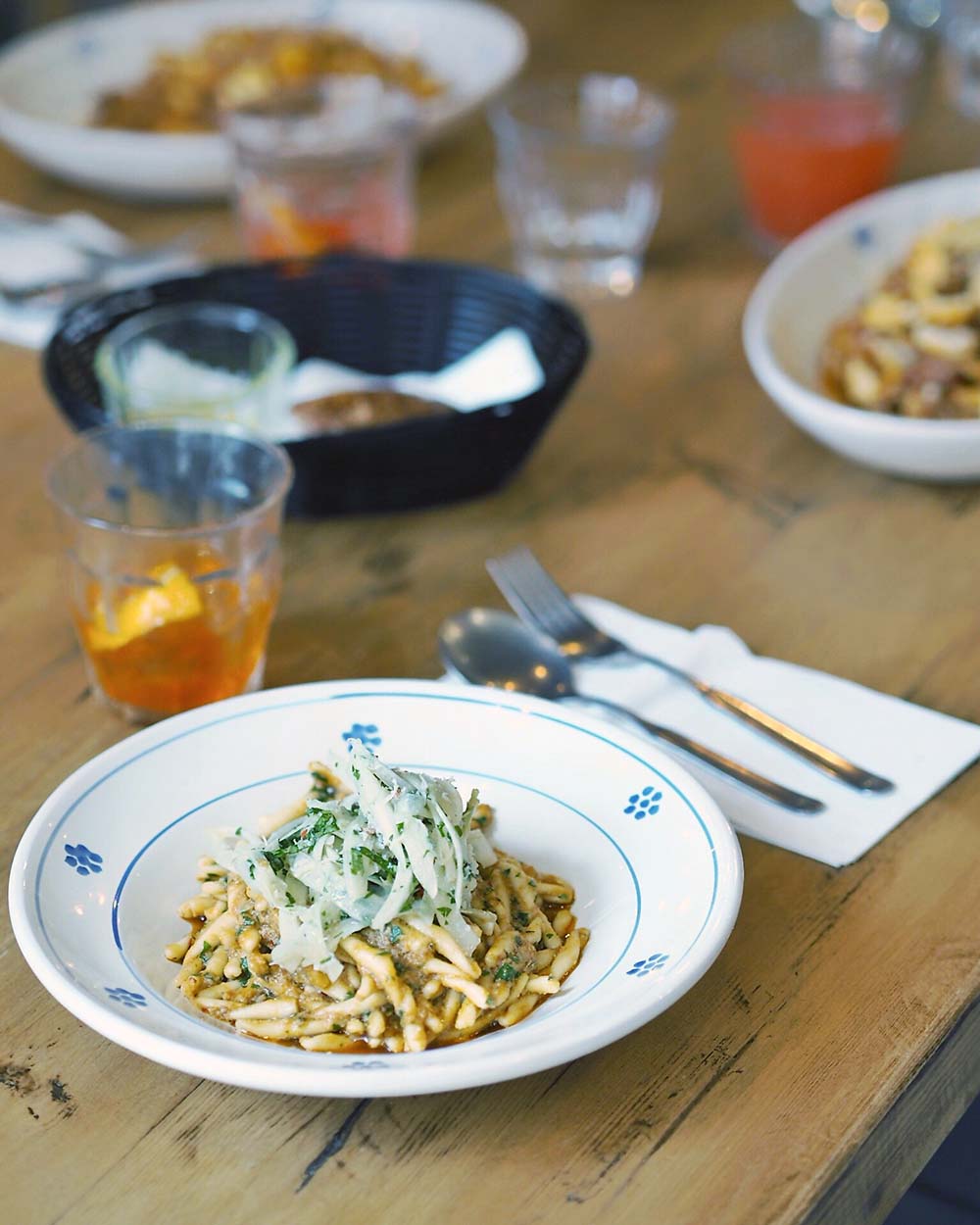 there’s a second pasta place claiming a spot on my top manchester eateries list, and it’s sugo pasta kitchen. with a firmly established legion of fans at their altrincham home base, sugo opened their second manchester outpost just up the road from elnecot last year, within the emerging foodie mecca of ancoats. specialising in southern italian pasta dishes using pasta delivered fresh each week from the ligorio family in san vito, puglia, their signature orecchiette dish with slow cooked beef shin, pork shoulder and nduja ragu won plaudits from my dining pals when we visited, while the strozzapreti with fresh devonshire crab, san marzano tomatoes, fennel and chilli that i tucked in to was exquisite. i’m already craving another visit soon!

on the fringe of piccadilly gardens, down a staircase to a large, bright basement, you will find one of the worst-kept secret dining spaces in manchester. bundobust is an indian street food restaurant, offering entirely meat-free – and largely vegan – dishes, that are fresh, flavourful and incredibly affordable. dishes are no more than £6 a pop, while at lunchtime (or dinner, if you’re manc) you can get two for £7. the basement is awash of vintage tiling and desi film poster, with long communal dining tables running down either side. your food arrives in bio-degradable polystyrene trays and disposable paper pots, while the cutlery is eco-friendly vegware. the okra fries, coated in chickpea batter and seasoned with black salt & mango powder, are sublime, while the massala dosa – mini rice pancakes filled with a cauliflower & potato dry fry – is my main go-to order. 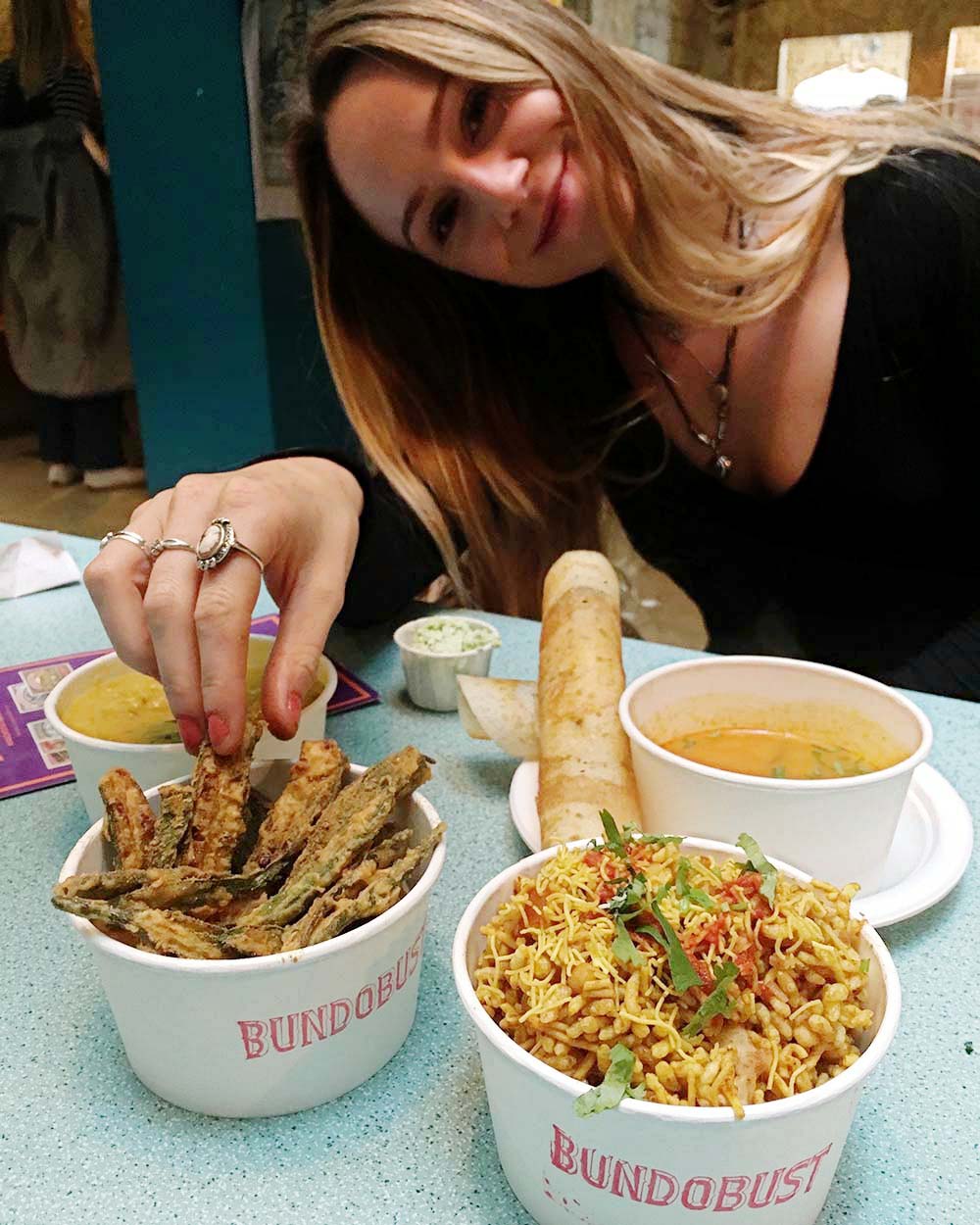 all photography © kate baxter, aka fabricofmylife 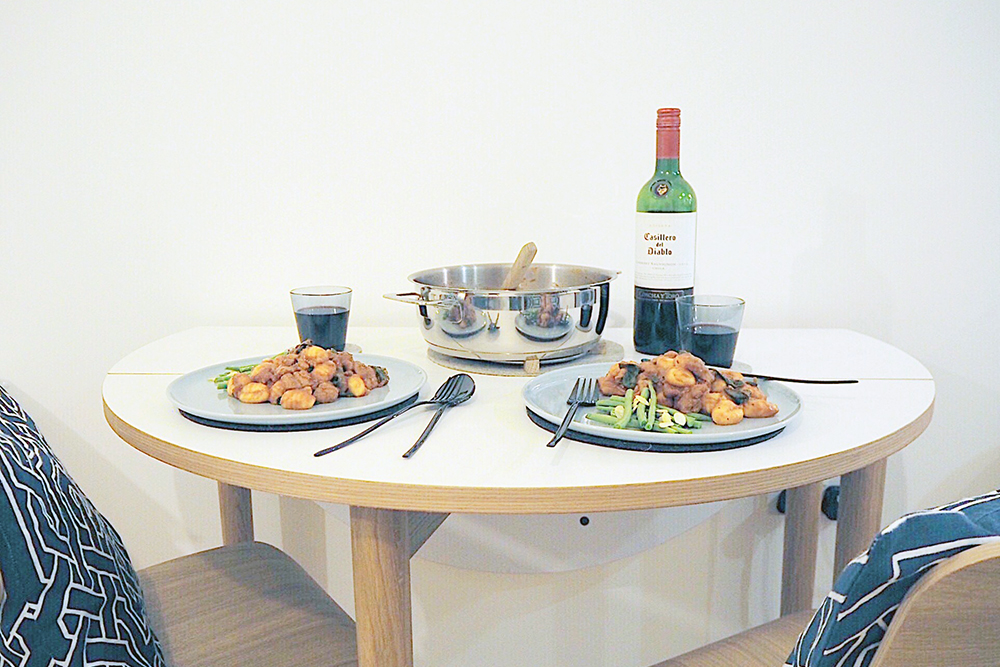 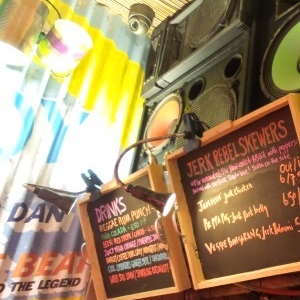 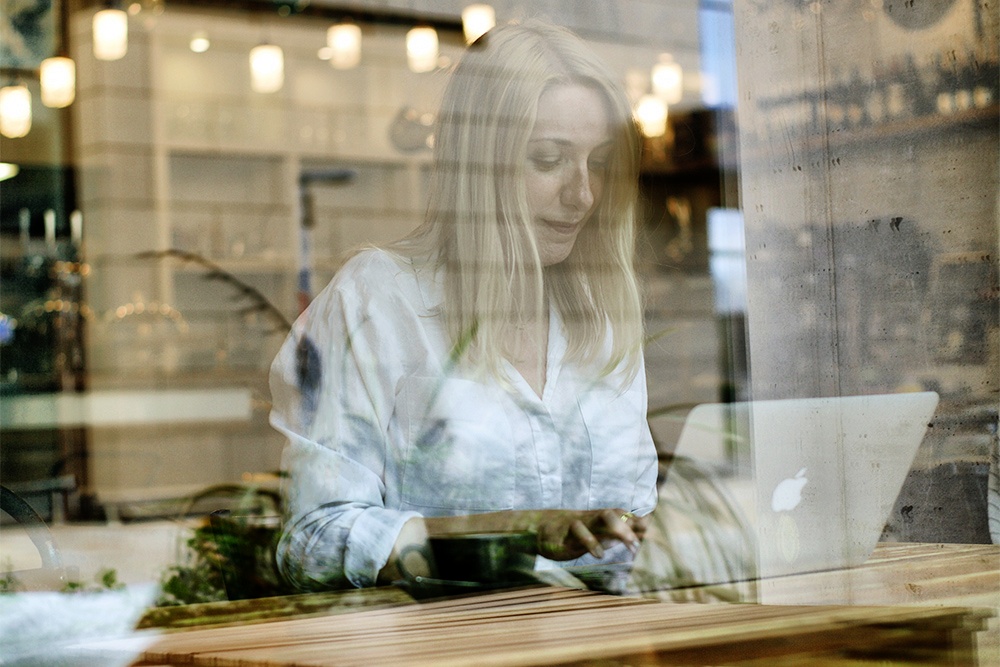 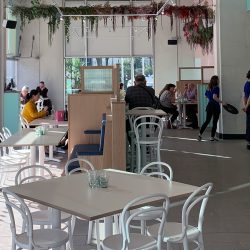 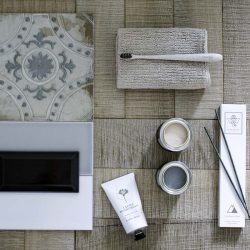