Unlock the power of plants 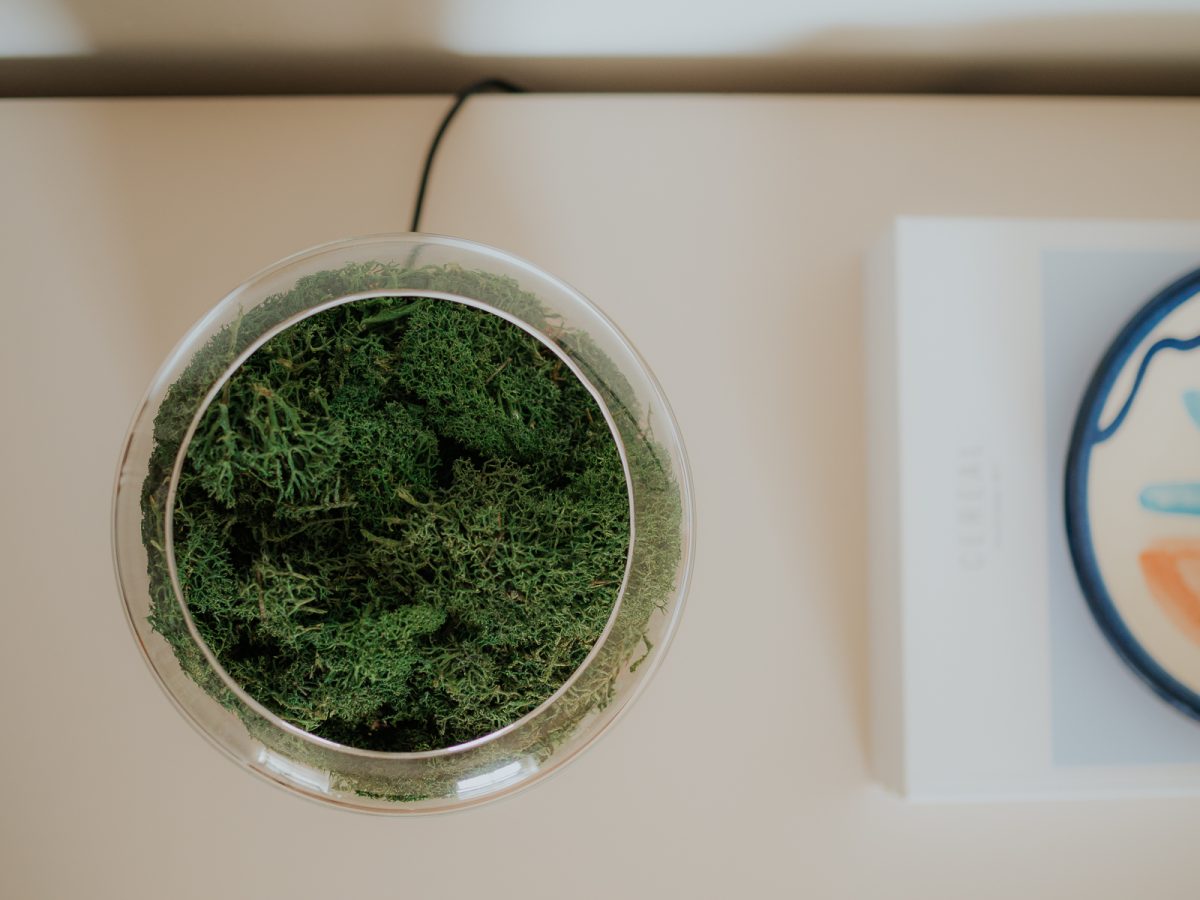 Even pre-pandemic, I spent a lot of time indoors. Working from home as a freelancer can all too easily mean your daily commute is from bed to desk to sofa and back again, without leaving the house for days on end.

In fact, as a predominantly urban dwelling population, it has been estimated that Brits spend an incredible 90 percent of our time indoors – a statistic that has only been exacerbated over the past few years through numerous national lockdowns and a wider cultural shift towards working from home.

And while you might typically think that spending so much time indoors means air pollution should be less of a immediate concern – I mean, you avoid exhaust and industry fumes by staying at home, don’t you? –  indoor air pollution can be just as damaging, and often a major trigger for breathing difficulties, sleep disturbances, brain fog and more. 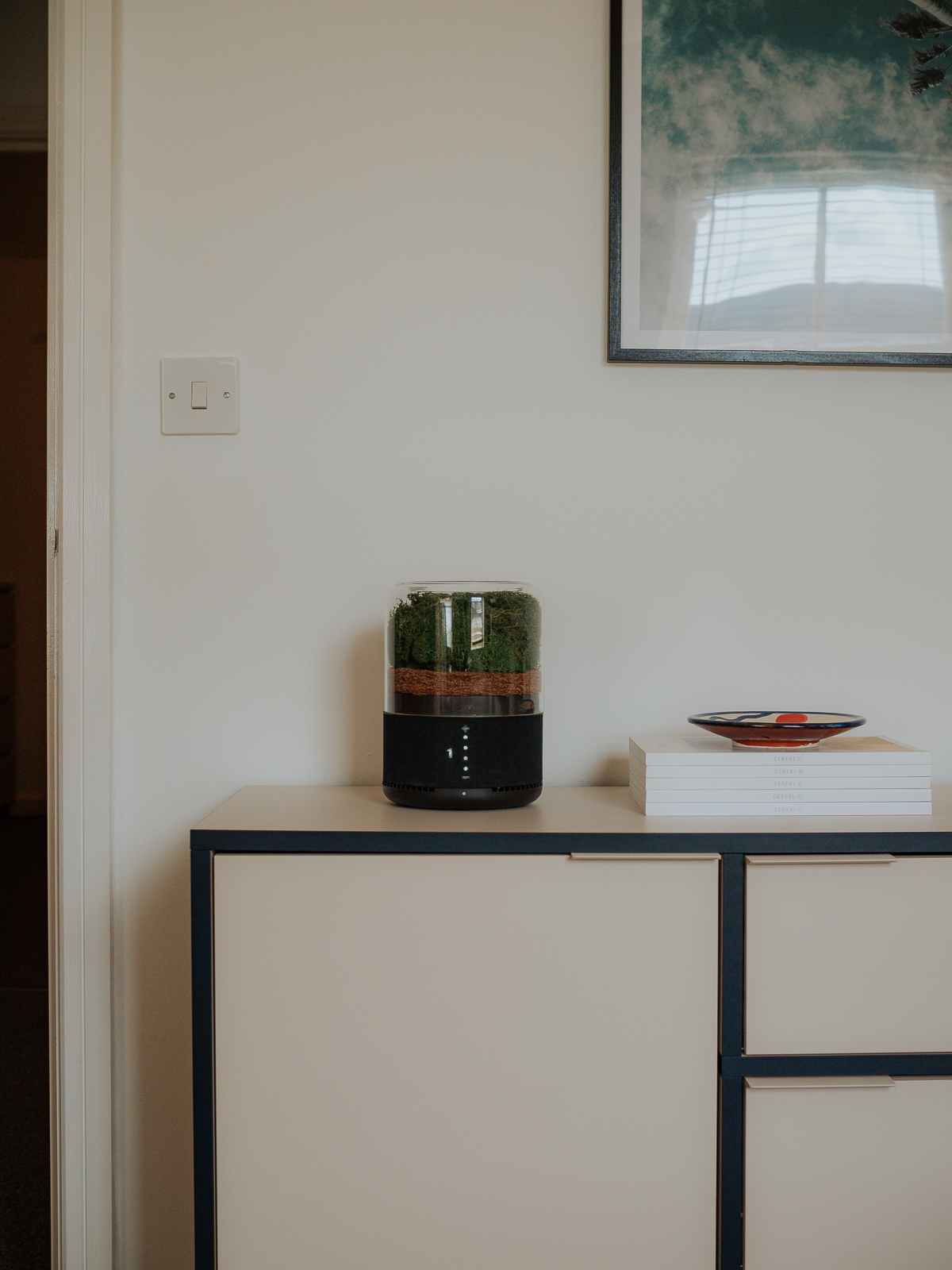 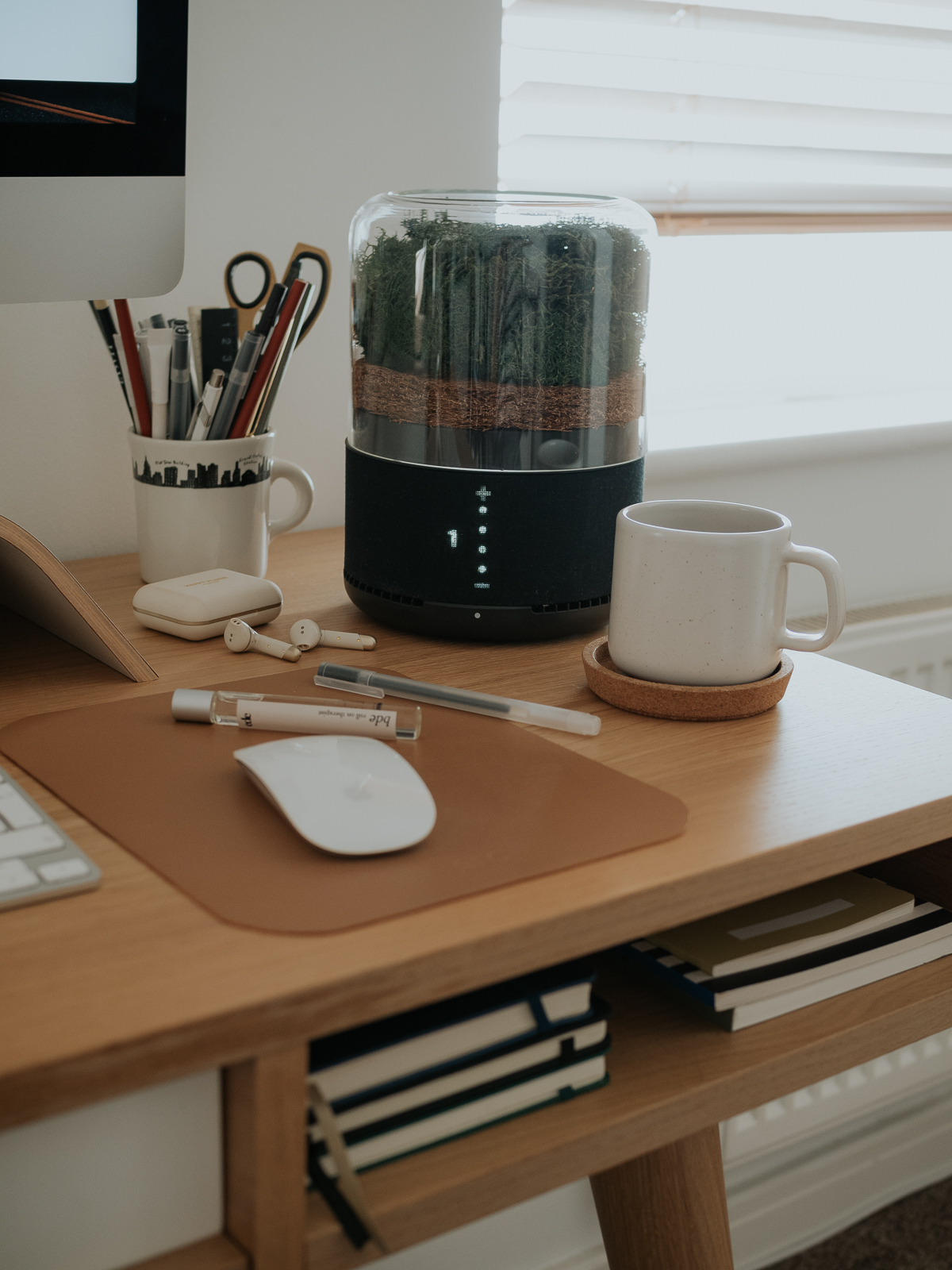 While the exhaust and industry fumes that cause air pollution outside can – and do – seep into your home through open doors and windows, tiny particles and harmful gases are also released inside our home every time we cook, use cleaning products, light candles or wood burning stoves, spray aerosol cans or use plug-in air fresheners.

Having pets in the house can also significantly increase indoor air pollution too, as their dander (microscopic flecks of skin) can remain suspended in the air for a long period of time and can easily stick to furniture, bedding, fabrics, and many other household items. This is certainly something we’ve noticed a lot since welcoming Paco into our home; he sheds little black hairs everywhere – perhaps even more than I shed my own (which I wouldn’t have thought possible!) – and that’s just what we can actually see. When you consider that we’re all shedding microscopic skin particles too, it becomes incredibly unsettling to realise that dust in homes is generally composed of about 20–50% dead skin cells – gross, huh?

So, besides opening your windows wide to air out your home (and essentially just exchanging indoor pollutants for outdoor ones), what’s the solution? Aside from filling your home with houseplants (which are lovely), the next best thing – which is actually far better – is an air purifier. Air purifiers work by trapping the micro particles that cause indoor air pollution and allowing clean air to circulate instead, meaning less potential exposure to the particles that lead to irritation, allergies and respiratory diseases.

I’ve been trialling the Briiv air purifier in my home for the past month which, unlike traditional air purifying devices, is made from 90% natural and renewable materials, making it the most sustainable air purifier on the market today, and reportedly as powerful as 3,043 houseplants (wow!). Also unlike most on the market, Briiv (pronounced breathe) has been cleverly designed with aesthetics in mind, making it far more appealing to slot into your home than a standard white purifying cube. A clear jar filled with a miniature forest of moss, coconut fiber and activated carbon, it’s a cross between a stylish portable speaker and terrarium, offering a visual connection with the natural world for an additional biophilic bonus. 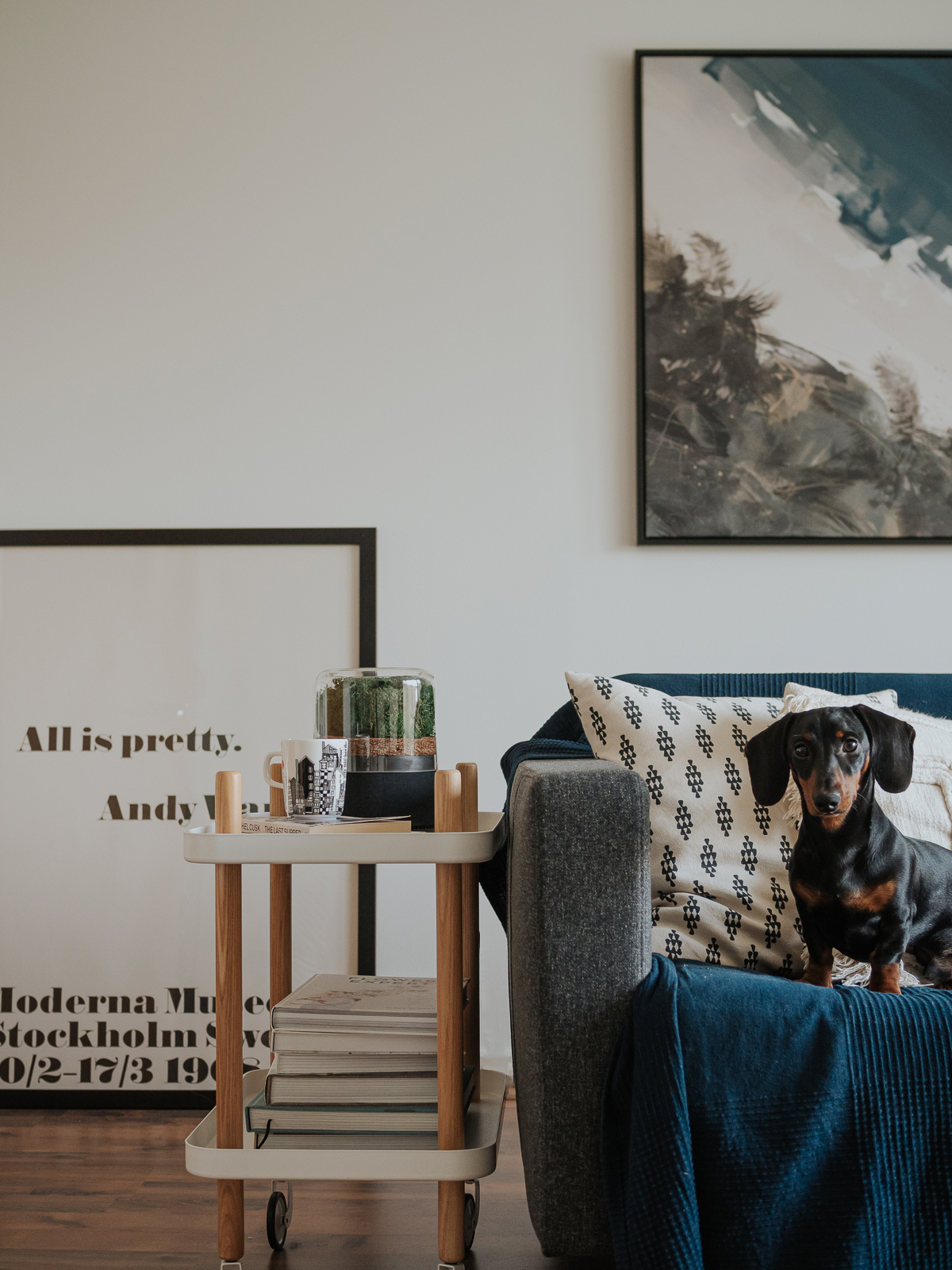 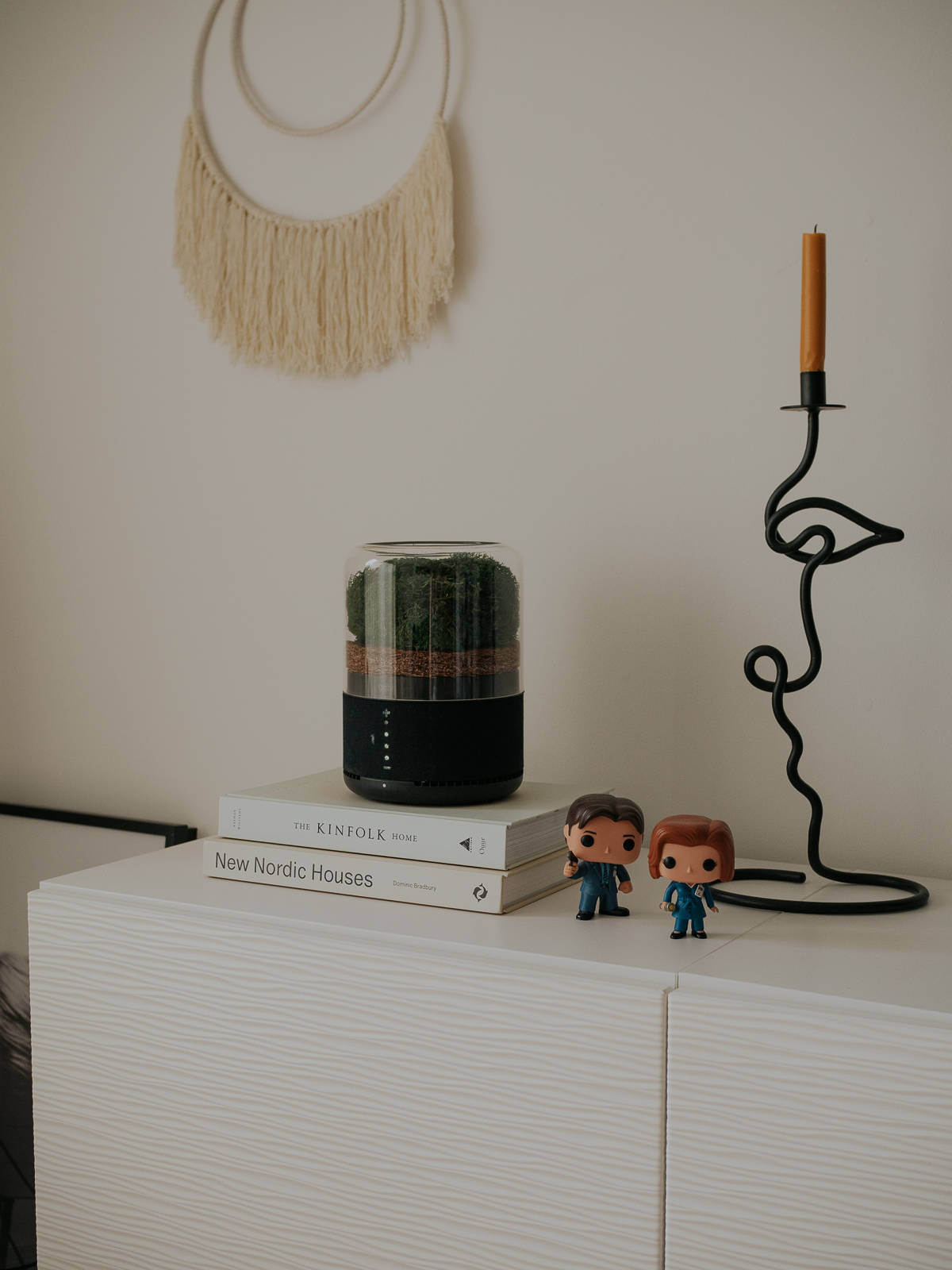 Every component of Briiv has been meticulously considered, and even the plastic used in the design is sustainable; utilsiing a new bio-plastic derived from elephant grass, which captures carbon as it grows and fully biodegrades. Many of the non-biodegradable elements (such as the glass dome) can be easily recycled, but those that can’t – along with the energy consumed during production, transportation and lifetime usage – are offset by a tree-planting programme run in association with Carbonfund.org.

The Briiv purifier works by sucking air in at the top of the glass dome and passing it through three different filtration layers before releasing it back out at the sides. The moss layer captures large particles, the coconut-fibre disc traps bacteria and mould spores, and the silk matrix filter beneath catches harmful fine dust.

There are four different speed settings, so you can control the air rate and associated noise level, and you don’t even need to have it switched on all the time to make a big difference. Just an hour’s use at full power will improve the air quality in a 36sqm living space, and there’s a timer setting that will automatically turn it off after 60 minutes – ideal for giving your home a boost after cleaning, or before going to sleep. 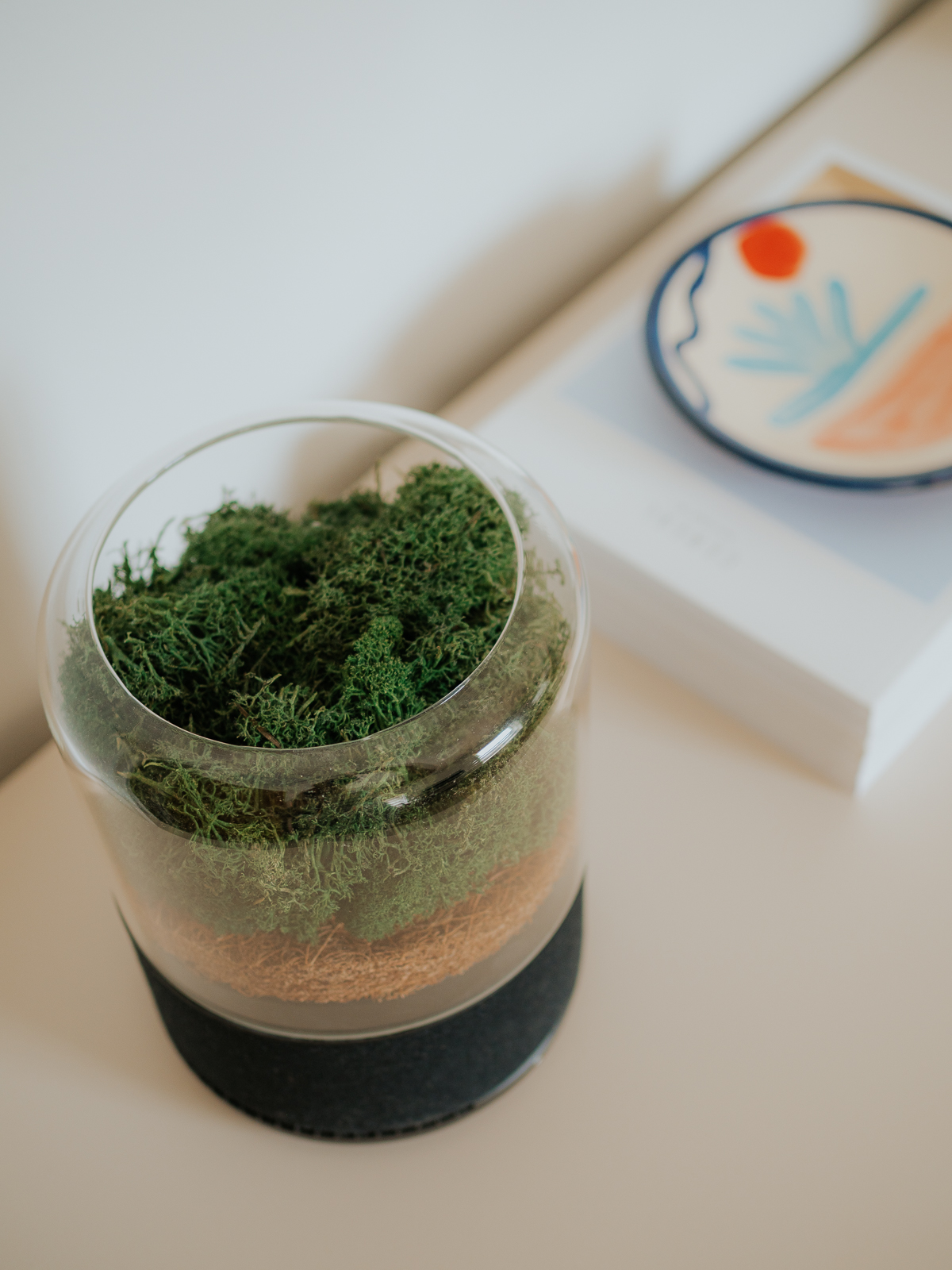 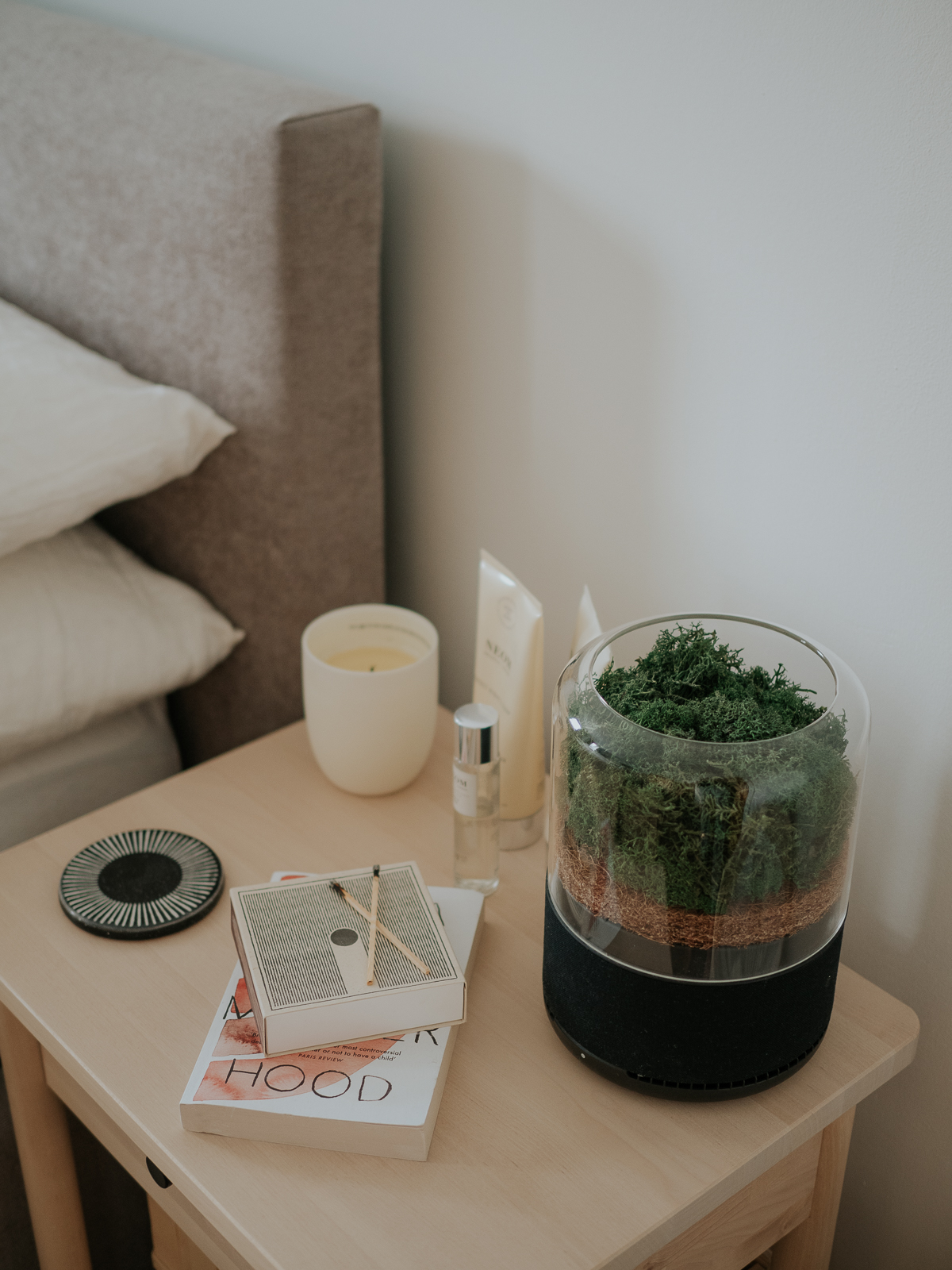 I’ve found myself using our Briiv air purifier most in our bedroom; a place where I find dust settles at an alarming rate. I have quite a significant dust allergy, and am a fairly sneezy person at the best of times, but whenever I clean and redistribute dust particles into the air my tendency to sneeze goes into overdrive! Running the Briiv air purifier on a one-hour cycle next to our bed before going to sleep definitely gives me peace of mind at the very least, and I’ve found myself to be a little less sneezy upon waking each morning.

I’ve also gotten into the habit of using running the Briiv air purifier in our living room in the morning, especially if I’ve been burning candles in there the previous evening. While organic wax candles with cotton wicks are the safest to burn – producing an estimated tenth of the soot normally created by a paraffin candle – they do still release some volatile organic compounds (VOCs) into the atmosphere, which can irritate the respiratory tract, and can be especially triggering for small pets. 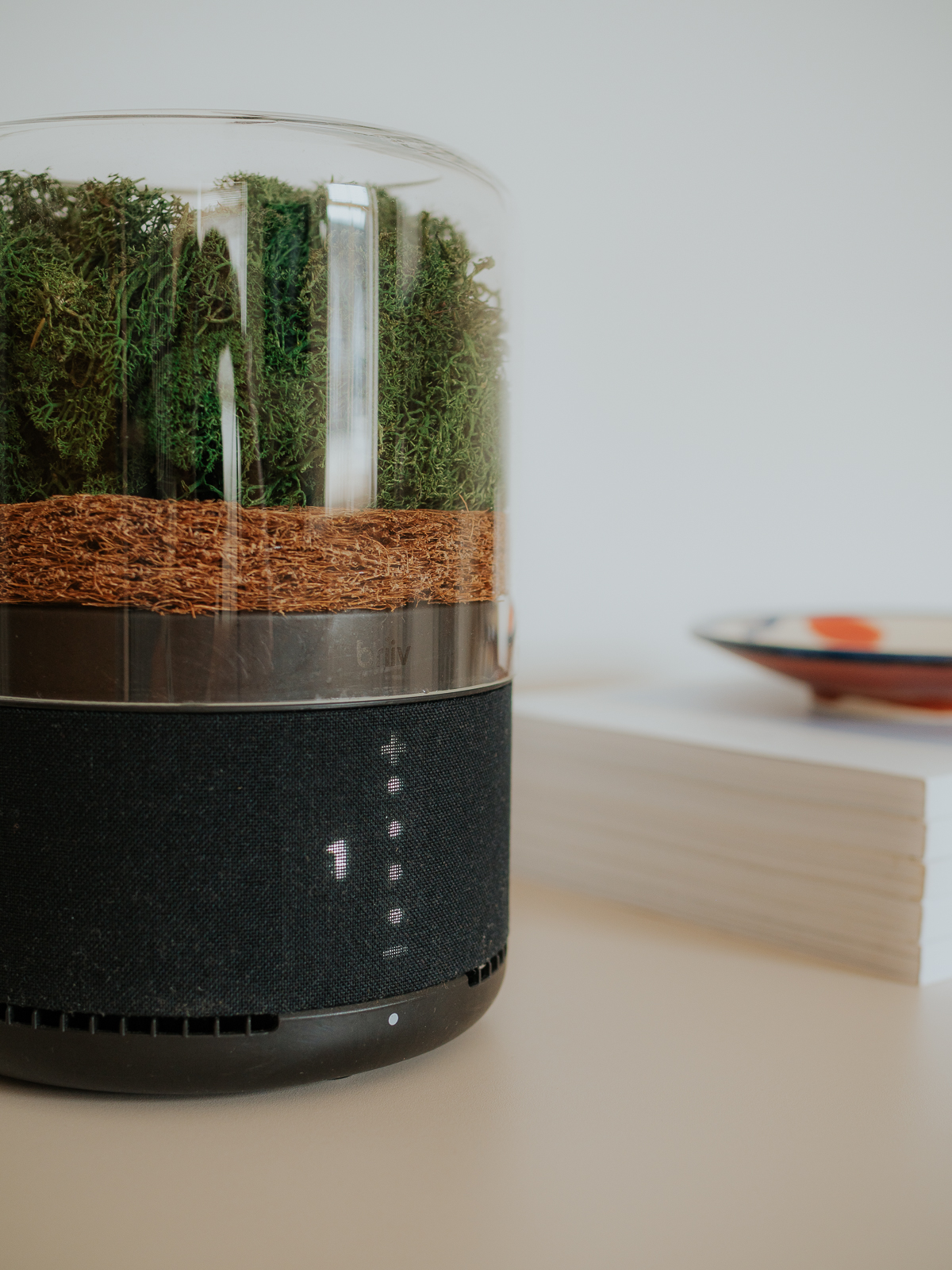 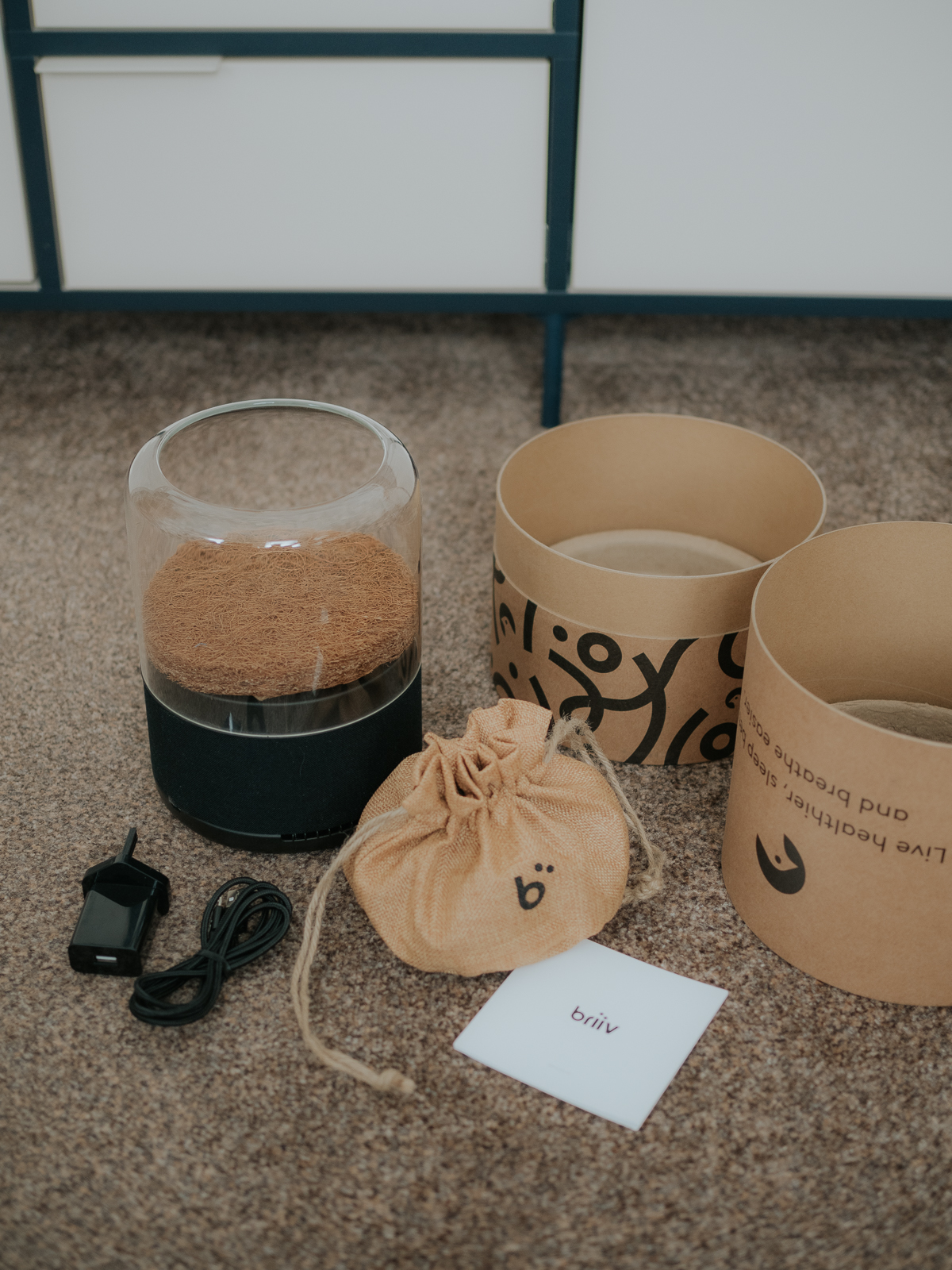 While the initial outlay for a Briiv air purifier isn’t cheap (RRP £299), the costs associated with running it are minimal, with the estimated electricity spend per year being less than £5. The filtration layers need replacing every 12 months, and the matrix filters every three, but you can buy a pack with everything you need for a year for £34.99.

It’s also incredibly easy to assemble out of the box; all you have to do is place the moss (which arrives inside a little pouch) inside the glass dome and plug the unit in. There’s even an app you can download and use to control the Briiv remotely, but it seems to be a little glitchy at present, and I’ve not had much luck connecting to my device. Apparently this is an issue they are working on but, to be honest, I haven’t really found need to operate the device via an app anyway – because I’m pretty much always home and its super easy to operate manually with the touch of a button.

Do you have – or are you considering buying – an air purifier for your home? 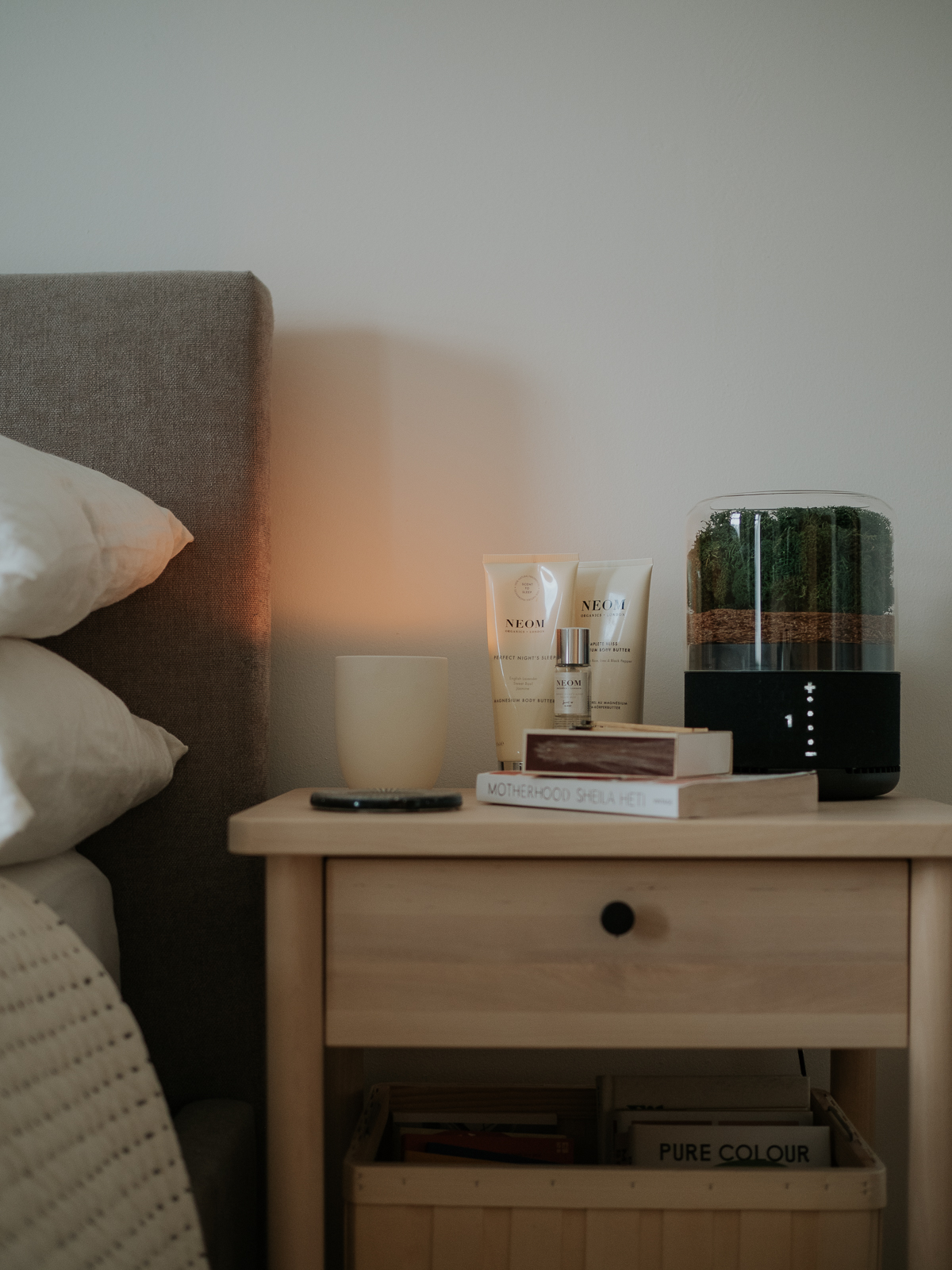 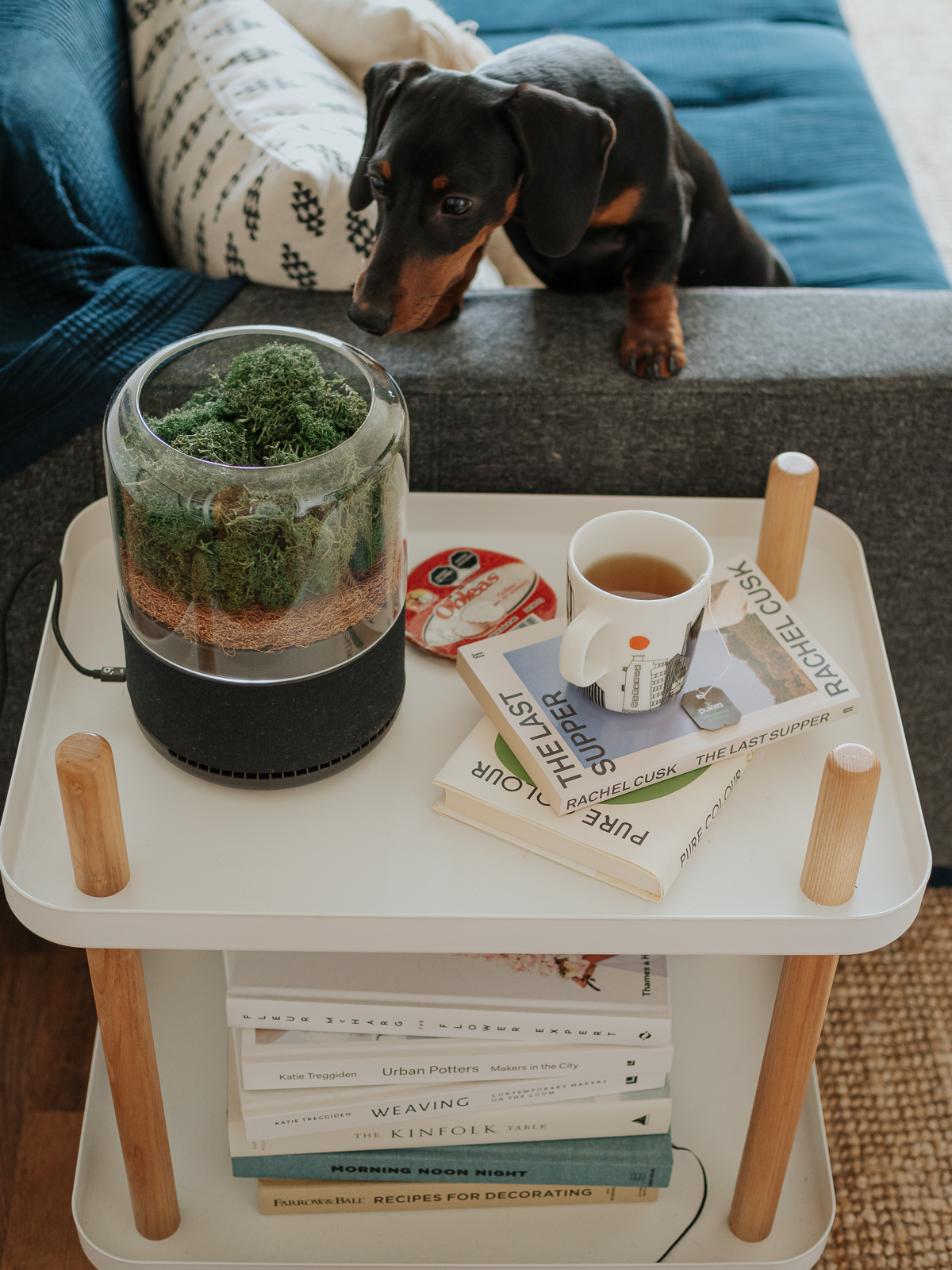 This post is in collaboration with Briiv, who have provided an air purifier in exchange for this review post. All thoughts and opinions are, as always, my own. All photography © Kate Baxter. 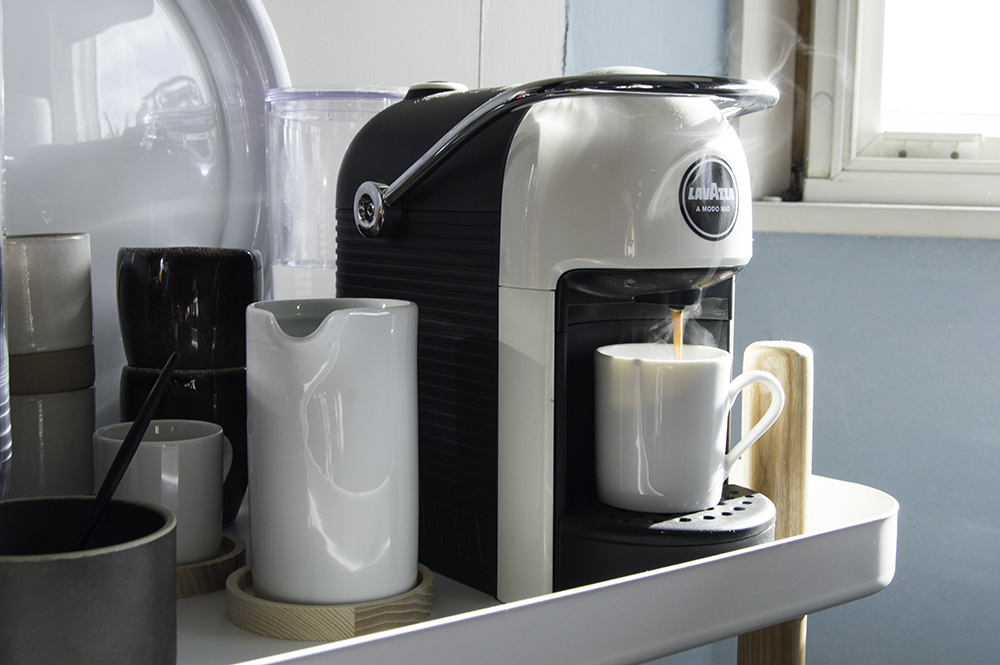 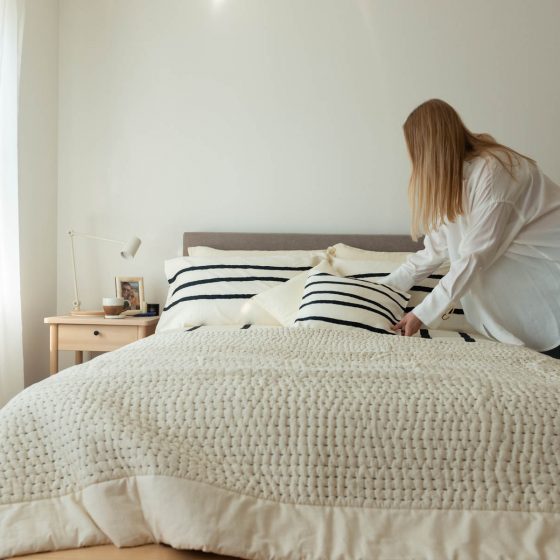 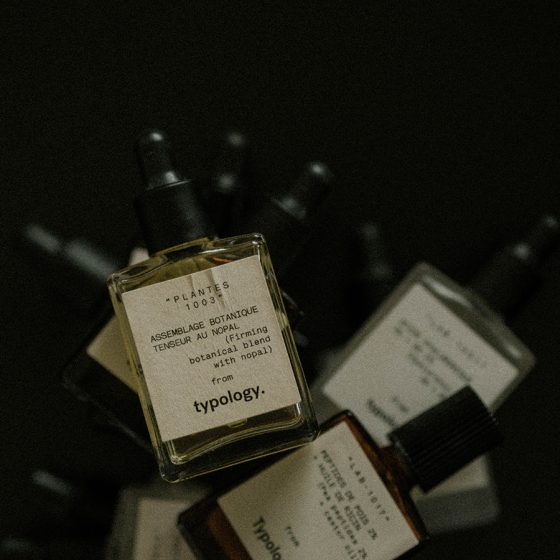 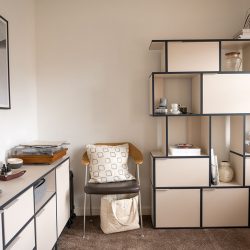